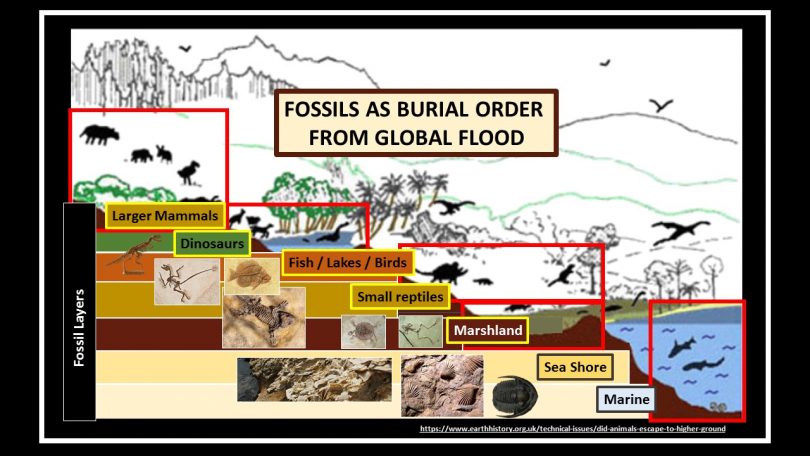 The fossil record contains billions of dead organisms (mostly marine) and the existence of this burial is non-disputed. The debate is how long it took for the fossils to form, how long the burial period took. Evolution proposes eons of time over billions of years while creationists point to the flood account of Noah. Neither can be proven because they occurred in the unobservable past but both are plausible based on the evidence.

Evolution and creation do not have different evidences. We share the same fossils, rock layers, and living organisms. We differ in our worldviews. Each side begins with a different belief about origins and events that occurred in the distant past.

Both sides agree that the fossil record, as imperfect as it may be, is a record of burial order of once living things that are now dead and fossilized in sedimentary layers. It is logical, that for the most part, the lower layers are older than the higher layers. In other words, the lower layers were laid down first, then the next layer, then the next and so on. In these regards there is no argument.

Where we differ is in the duration of time it took for these layers to form.

Evolution proclaims billions of years have passed since the first life forms were fossilized and then through eons of time more were formed very slowly. Further more the transitions from marine to land burials in the higher levels of sedimentary layers are indications of evolution: simpler marine creatures becoming more complex land creatures.

Creationist argue that perhaps the fossils formed during the biblical account of the Flood of Noah. The bible states that these flood waters were global and covered even the highest mountain tops where we also find marine fossils today.

Additionally, the global flood account says the flood waters persisted for one year before land was visible, therefore these massive sedimentary layers were laid down over approximately a year plus the years as the waters receded.

We can say mega-sequences are indication of the sorting of materials by flood waters. Creationists also point out the complex life was apparent from the very lowest layers of the Cambrian where animals such as the horseshoe crab which is alive and well today as a living fossil: still relatively unchanged. Lastly, the majority of fossils are marine accounting for about 95% of all fossils. The remaining 5% are composed of all other types including amphibians, birds, fresh water creatures, land animals (including dinosaurs) but most are plants and fish.