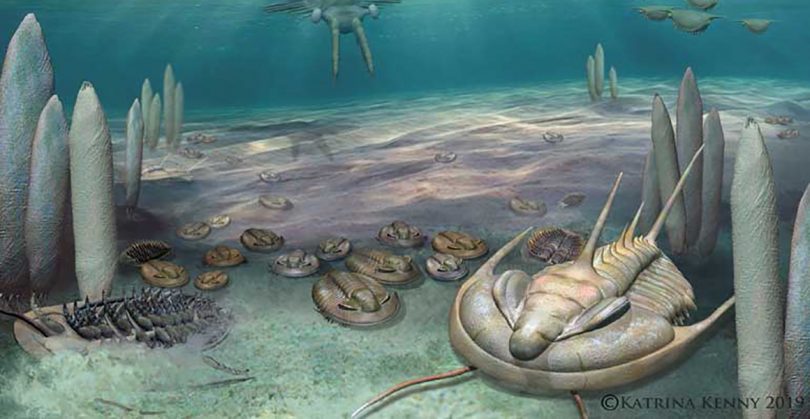 The absence of fossils in the Pre-Cambrian followed in the next layer by the sudden appearance of massive complexity and diversity in the fossil record, called “The Cambrian Explosion” remains as “an insurmountable obstacle to Darwinian evolution.” Afterall, the Theory imagines simple organisms gaining complexity and beneficial traits over time as spontaneous random mutations move along the descent of life with the help of natural selection. There is no such evidence.

“The sudden appearance of numerous species of animals without common predecessors, during the “Cambrian explosion,” proves to be an insurmountable obstacle to neo-Darwinian evolution.”

The book Darwin’s Doubt by Stephen Meyer is also noted by Yale professor David Gelernter as the reason he quit “believing” in Darwinian Evolution all together.

“The “Cambrian Explosion” refers to the sudden appearance in the fossil record of complex animals with mineralized skeletal remains without any precursor life forms in lower levels.

“It may represent the most important evolutionary event in the history of life on Earth.  The beginning of the explosion is generally placed about 542 million years ago.”

“The explosion is particularly remarkable because all major animal body plans appeared during this time…(a) rapid appearance of a wide variety of animals.  As the number and variety of organisms increased, they occupied a variety of new marine environments and habitats.”

Cambrian seas teemed with animals of various sizes, shapes, and ecologies; some lived on or in the sea floor, while others actively swam in the water.

“The early record of the Cambrian Explosion is based on fossils – principally the appearance of mineralized skeletons and complex trace fossils. The typically tiny skeletal elements from this time are called “small shelly fossils.”

Explaining the Explosion
“Why did the Cambrian explosion happen when it did, and why was it such a unique event? While there is no current consensus among scientists, most researchers agree the explosion cannot be ascribed to a single, simple causal mechanism. The potential triggers can be classified in three main categories: environmental, genetic, and ecological.  Deciphering the impact of each of these factors remains one of the most important challenges faced by paleontologists today.”

Almost every metazoan phylum (organisms) with hard parts, and many that lack hard parts, were in the Cambrian.”

The Cambrian Oceans would have been perfectly familiar to a modern-day scuba diver, “almost all of the living marine phyla were present”.

Common fossils left out of artistic impressions of the Cambrian Oceans:

The oceans would have looked nothing like the artistic impressions that load the internet filled with mysterious looking creatures. The waters would be very familiar with a few exceptions (to a marine biologist) regarding remote variances in species and some now (likely) extinct echinoderm species.

The end of the Cambrian saw a series of mass extinctions during which many shell-dwelling brachiopods (not all) and other animals went extinct. The trilobites also suffered heavy losses (but are still among the living today).”

Credit: The Burgess Shale https://burgess-shale.rom.on.ca/en/science/origin/04-cambrian-explosion.php for images and textual contributions- opinions and conclusions are all ours.