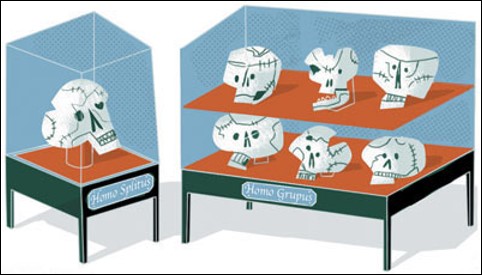 Fossil are collected by paleontologists driven by two different approaches which we can call “lumpers” or “splitters”. Lumpers tend to categorize similar fossils into the species while splitters seem to find new species at each new dig site. Splitters are more numerous because discovering a new species causes fame, notoriety and ultimately more funding dollars. Such is the clear case in human evolution. In this field, every researcher breathlessly seeks to have the fossils fit into a new yet undiscovered “pre-human” species…

Lumpers and splitters are opposing factions in any discipline that has to place individual examples into rigorously defined categories such as in paleontology (fossils) or anthropology (human “fossils”).  The lumper-splitter dilemma occurs when there is the need to create classifications and assign examples to them, for example biological taxa and so on.  No where is this more apparent then in the fields of fossils but especially in the specific field focused on human evolution (anthropology).

A “lumper” is an individual who assigns types broadly, assuming that differences are not as important as signature similarities.  Such as the order of cats such as lions, tigers, and bobcats are not a new species of cat but are the same cat family or genus.

A “splitter” is an individual who takes precise definitions, and creates new categories to classify samples that differ in keyways and often times minor variances.

Anthropologists and Paleontologists get fame and funding by “splitting” or finding “new species”. So these fields are filled with splitters.

…studies are showing that interactions between the “new” humans (Modern Humans like you and me) and the “old” humans (Neanderthals, Denisovans, Homo erectus, Homo florensiensis, that are all now extinct) was not just a case of simple replacement. Instead, it appears that groups of new and old humans intermingled, interbred, fought, and interacted in a multitude of different ways which we are still disentangling.