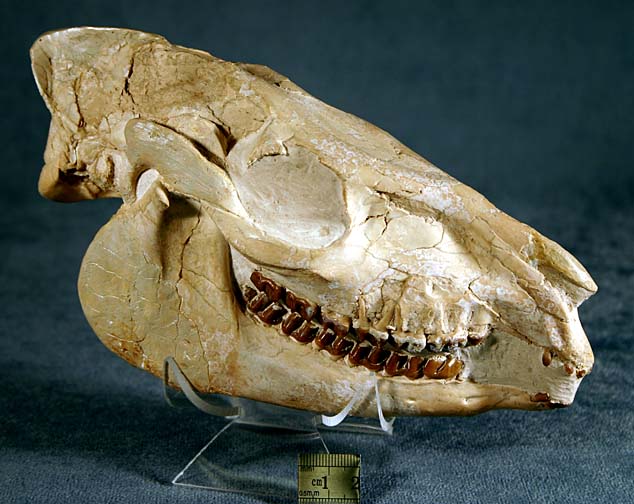 The skull used as the oldest early horse in the lined up fossils of horse evolution, called the “dawn horse”, as exhaustively described in textbooks and at museums, has an uncomfortable resemblance to a living animal in Africa called a Hyrax. Unfortunately, Hyrax is not a horse but a fox sized mammal that is genetically related to an elephant. Also, inconveniently, the Hyrax is not millions of years extinct but alive today.

“Hyracotherium (“the dawn horse”) is presented as an ancestor of horse which was supposed as disappearing millions of years ago but it actually closely resembles the Hyrax (a fox sized mammal) which still lives in Africa today.”

Could the Hyrax be the supposed Hyracotherium (or “the dawn horse” of horse evolution)? The Hyrax is a fox sized mammal alive today in Africa. It is ironically the closest genetic relative to the elephant.

Notice the in Figure 1 above that Hyracotherium is shown with hoof like feet but see the image below in Figure 2: they are a 4 toed animal

This so called “straight line of evolution of the horse” from Hyracotherium (aka “Dawn Horse”) to the modern Horse is taught in almost every evolutionary textbook despite scientists knowing that the fossils actually construct a “horse family bush” and not a straight line. Additionally, upon a closer examination, fossil evidence is lacking and crowded with conjecture.

Genetics have provided an even bigger “puzzles” for the Hyrax and horse evolution. The closest living relative today to an elephant is the Hyrax! Despite how huge the elephant itself is and how small the Hyrax is– genetically they are close. Wait– what about horses? Well the Hyrax was a fossil used as the “dawn horse” but it is no closer to being a horse then being an elephant!