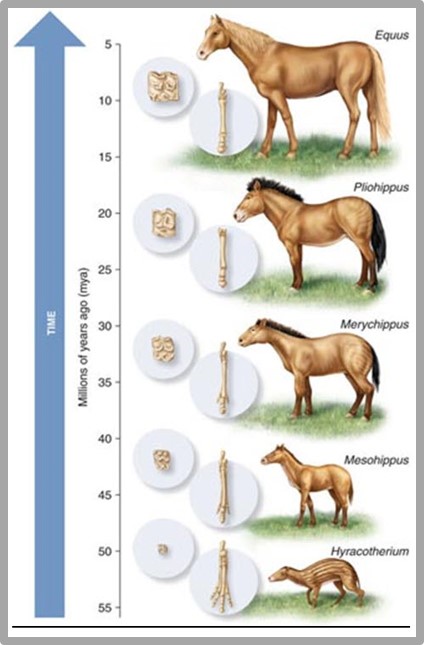 This so called “straight line of evolution of the horse” from Hyracotherium (aka “Dawn Horse”) to the modern Horse is taught in almost every evolutionary textbook despite scientists knowing that the fossils actually construct a “horse family bush” and not a straight line. Additionally, upon a closer examination, fossil evidence is lacking and crowded with conjecture.

Encyclopedia Britannica touts horse evolution as “among the best-documented (evidence for evolution) in all paleontology”.

The Hyracotherium is not even related to the Mesohippus genetically. In fact, the entire horse series is three distinct misclassified generas.

The fossil evidence actually illustrates a “bush” of evolution comprised of various fossils of three different animals. The differences are found within the teeth of each of the three creatures. Differences as extreme as the difference between cats, dogs, or a deer. Each have different dental designs so that is what we find within these varieties of animals. The teeth is also where the horses are divided. However, such teeth fossil evidence of horses are rare but from what is found their are big differences.

Modern horses have long teeth where are good for eating tough blades of grass but the distant Hyracotherium “dawn horse” had short teeth for eating soft leaves– these are massive differences.

Also, in horse evolution there are at least two known gaps (missing transitionary forms or “missing links”) . The first gap occurs at Epihippus where only sparse fossil pieces have been found. The samples found resemble those of the earlier Orohippus, Eohippus and Hyracotherid species. The second gap occurs in (or just after) the group Parahippus where the species are supposed as resembling both Miohippus and Mesohippus. Later, Parahippus are supposed to have looked like Merychippus. However, the fossil material for Parahippus is incomplete and it is plausible that the samples are actually parts of Parahippus or perhaps belonging to two different animals—Miohippus and Merychippus. Therefore, the “Parahippus” step in the horse series appears to be a mixed up group of unrelated fossils.

In newer evolutionary schemes, different names have been given to very similar animals, giving the appearance of evolution. Similar occurrences happen within supposed human evolution “species” see lumpers and splitters) which help illustrate the story of evolution while providing the additional benefit of fame to the discoverer of this “new” horse species.

“Much of this story [horse evolution] is incorrect …”

A study of fossil horses reveals at least three groups of animals within the horse family plus some unrelated animals such as tapirs. The three Equid groups correspond closely to different subfamilies of Equidae, and could be considered as three separate created kinds. Most of these different kinds lived (or actually, were buried!) nearly at the same time and do not show much progressive change as far as horse evolution is concerned, just a general increase in size.

Therefore, Equidae, belong in different families because the evidence is not convincing and ought to be abandoned.

Genetics have provided an even bigger “puzzles” for the Hyrax and horse evolution. The closest living relative today to an elephant is the Hyrax! Despite how huge the elephant itself is and how small the Hyrax is– genetically they are close. Wait– what about horses? Well the Hyrax was a fossil used as the “dawn horse” but it is no closer to being a horse then being an elephant!

Finally, lining up smaller fossils to bigger fossils does not prove they evolved from one another. Just imagine if we dug up bones of smaller dogs like poodles (in lower layers) and then found discovered larger breeds like great Danes in some upper layers. Because we observed dog breeding is not an example of evolution but genetic bottle necking, we know the dog breeds today are a result of artificial breeding and not evolution. The idea of smaller sizes becoming larger is a construct of evolution which is not observed consistently in the fossil evidence.

Lastly, we know the biggest assumption for horse evolution (or any fossil record related claim of “evolution”) is directly tied to the assumption that the geologic layers are composed of sediments laid down over millions of years as a fact. A fact which we dispute with mountains of evidence including flat gaps , rapid stratification , carbon-14 in dinosaur fossils , soft tissues in dinosaur fossils , Cambrian explosion , and many rapid erosion events such as observed at Mount St Helen’s. We do not dispute that fossils are a burial order of living things, we debate how long it took to happen.

Whenever evolution provides conclusions we must remain very cautious because the solution is based on the worldview of naturalism and on an endless string of theories (really a conjectures). Each conclusion is interdependent on the next. Starting with the creation of the universe with the supposed Big Bang to abiogenesis (the chemical emergence of life) to Darwinian Evolution of the common ancestry of all living organisms. Naturalists insist we keep each of these areas separate because the extreme weakness of conjecture, outside observed genetic heredity, makes the claims laughable. But the reality of naturalism finds that each and every conjecture must be correct or like a long line of dominoes, when one falls, they will all sequentially tumble down.

“The uniform, continuous transformation of Hyracotherium into Equus, so dear to the hearts of generations of textbook writers never happened in nature.”

“…over the years fossil horses have been cited as a prime example of orthogenesis [“straight-line evolution”] …it can no longer be considered a valid theory…we find that once a notion becomes part of accepted scientific knowledge, it is very difficult to modify or reject it.”

“In some ways it looks as if the pattern of horse evolution (is)…chaotic where “in almost no instance is any known form considered to be a descendant from any other known form;

“every subordinate grouping is assumed to have sprung, quite separately and usually without any known intermediate stage, from hypothetical common ancestors in the Early Eocene or Late Cretaceous”

“Because its complications are usually ignored by biology textbooks…the main features of the story have in fact stood the test of time….”