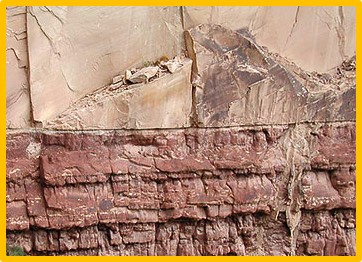 Flat gap rock layers are marked by a surprising lack of erosion. Such flatness indicates either extinction or rapid layering. Neither of these two options play well with Darwinian timetables as extinction stalls the evolution of species and rapid rock layering steals millions of years required for evolution. Ironically, between these flat gap’s (the air between the layers) evolution adds 10, 100, or even 200+ million years of time! In doing so, they suggest that these flat rock layers that laid exposed to the elements for millions of years, never experienced any substantial erosion from wind, water, insects, or roots. Such claims require a suspension of logic.

Flat layers also called “Flat Gaps” or “Paraconformities” are shown (in the image from The Grand Canyon abovebetween the whitish Coconino sandstone overlaid with the reddish Hermit Shale as a completely flat layer. This provides evidence which reveals no sign of insect or root erosion in the layers (called bioturbation) from living organisms which indicates extinction and not evolution.

Flat Gaps are evidence of either mass extinction or very rapid processes potentially likely caused by a global flood catastrophe.

If this fragile sandstone, supposed by geologic ages as being more than twenty million years old, we would reasonably expect to find massive erosion but we do not. We find an abrupt flatness defying the landscapes around it, standing in fierce objection to the interpretation that millions of years passed as it sat flat and virtually untouched for millions and millions of years.

Such Flat Gaps pose a serious challenge to the idea of long geologic ages because uniformitarian naturalistic assumes to find constant erosion, tectonic activity, bioturbation, and even drifting of continents as time passes. All these events would equate to either additional sedimentary deposition or erosion but certainly not the flat gaps found. These Flat Gaps found all around the world on every continent indicating again that the past consisted of either a mass extinction of live which caused no bioturbation or very rapid sedimentary layering. Both of these are best answered by a massive flood.

Additionally, these gaps have missing layers of sediments which are presumed (elsewhere) to represent eons of time (millions to hundreds of millions of years). See figure 1. By applying millions of years to these “missing” flat gaps as a means to maintaining the theorized eons of geologic time is nonsensical.

“The complete absence of the deep erosion expected at these gaps over their alleged long ages is very difficult to explain within the long-age uniformitarian paradigm. On the other hand, flat gaps are easily explained when interpreted within the worldwide Flood framework described in the Bible, which deposited most of the sedimentary record of the earth.”