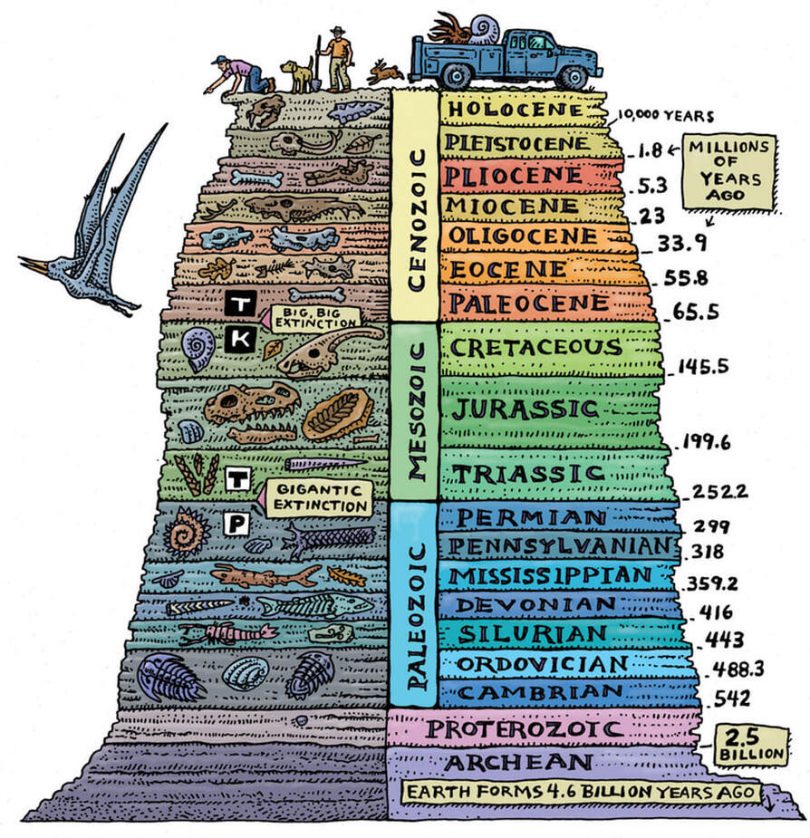 Evolution assures the fossil record is solid evidence for evolution: simple organisms at the lowest layers and complex life at the upper layers. However, millions of fossils are discovered as being “out of order” by not matching this supposed order. Sometimes fossils are off by many millions of years! Evolution excuses these “problems” by suggesting perhaps landslides or earthquakes moved the fossils into the wrong layer. However, the problem is vast and troublesome for the tale of the evolution but fully understandable as a result of a global flood.

Birds predate dinosaurs. Another example are dinosaurs which are thought to have perhaps never went extinct and ultimately evolved into modern birds we have today.

The fossil record does not support this conclusion by placing bird fossils before many dinosaurs. The famous fossil called Archaeopteryx places the first bird at 150 million years ago although dinosaurs went extinct approximately 68 million years ago.

Confuciusornis was a true beaked bird (a duck) that predates the ‘feathered’ dinosaurs which it allegedly evolved from. This bird has been found in the stomach of a dinosaur. (1)

Most people don’t picture a T. rex walking along with a duck flying overhead, but that’s what the so-called ‘dino-era’ fossils would prove!”

The alleged evolutionary transformation of reptiles to birds is fraught with numerous subjective interpretations and conflicting opinions of evolutionary descent.  The fashionable theory is that birds evolved from theropods (carnivorous dinosaurs).

(Dinosaur to bird evolution is) “one of the grander scientific hoaxes of our age—the paleontological equivalent of cold fusion.”

Larger mammals existed with dinosaurs. Mammals were eating smaller dinosaurs before larger mammals had evolved. A dog-sized mammal fossil was found with remains of dinosaurs in its stomach—but no mammals large enough to prey on dinosaurs were not supposed to exist alongside them.

100 million year old mammal hair. A mammal hair was found in amber supposed as 100 million years old. Once again, this is smack in the middle of the alleged ‘age of dinosaurs’ when no such mammals had evolved.

Ducks, Squirrels, Bees, Frogs, and Cockroaches all lived with dinosaurs. “To the surprise of many, ducks (3), squirrels (4), platypus (5), beaver-like (6), and badger-like (7) creatures have all been found in ‘dinosaur-era’ rock layers along with bees, cockroaches, frogs and pine trees.

Horses ran with dinosaurs 100 million years too early. In Uzbekistan, eighty-six consecutive hoof prints (from horses) were found in rocks dating back to the dinosaurs. A leading authority on the Grand Canyon also published photographs of “horse-like” hoof prints visible in the rocks there. The problems here is hoofed animals are supposed to have been predated by dinosaurs by more than 100 million years! (8)

The evolutionary interpretation of the fossil record is so flexible that it can incorporate virtually any new change, no matter how unexpected. In other words, if an “out-of-order” fossil is found (according to their standard view), then it is just incorporated as new evidence to provide a better understanding of evolution! In short, evolution is assumed and then used to explain the fossils. So, no matter what we find, by the very nature of the way they interpret the facts, nothing would falsify evolution anyway!

If evolution happened, the fossil record should show continuous and gradual changes from the bottom to the top layers. Actually, many gaps or discontinuities appear throughout the fossil record. At the most fundamental level, a big gap exists between forms of life whose cells have nuclei (eukaryotes such as plants, animals, and fungi) and those that don’t (prokaryotes such as bacteria and blue-green algae). Fossil links are also missing between large groupings of plants, between single-celled forms of life and invertebrates (animals without backbones), among insects, between invertebrates and vertebrates (animals with backbones), between fish and amphibians, between amphibians and reptiles, between reptiles and mammals, between reptiles and birds, between primates and other mammals, and between apes and other primates. In fact, chains are missing, not links. The fossil record has been studied so thoroughly that it is safe to conclude that these gaps are real; they will never be filled.