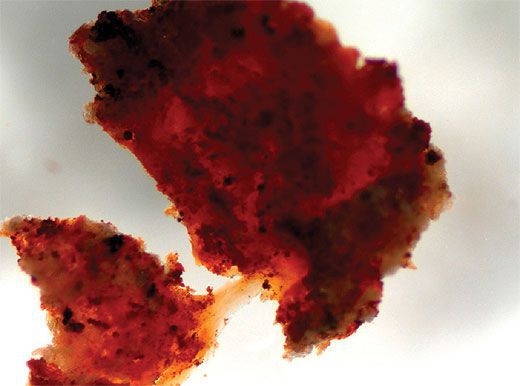 The discovery of soft dinosaur tissues provided so much detail that tests revealed that this femur belonged to a female T-Rex, in her teenage years, and fertile and likely pregnant (carrying eggs to be laid) at the time she was fossilized. Details revealed by soft structures that defy evolutionary time scales.

On the hollow inside surface of the T-Rex femur, Schweitzer discovered scraps of bone that gave a surprising amount of information about the dinosaur that made them. Details that defied the idea that these same samples were thought to being some 68 million years old!

Bones may seem as steady as stone, but they’re actually constantly in flux as the organism lives out its lifespan. Pregnant females use calcium from their bones to build the skeleton for a developing fetus. Therefore, females form a calcium-rich structure called medullary bone on the inside of their leg and other bones which indicates this dinosaur was a pregnant female.

“It’s a girl and she’s pregnant,” Schweitzer recalls telling her lab technician when she looked at the fragments.

How could such tissues and details remain even after thousands of years. The discovery of medullary bone in a female T Rex pushes such conjecture to new heights.

“Dinosaur Shocker”; Probing a 68-million-year-old T. rex, Mary Schweitzer stumbled upon astonishing signs of life that may radically change our view of the ancient beasts
By Helen Fields, Smithsonian Magazine, May 2006