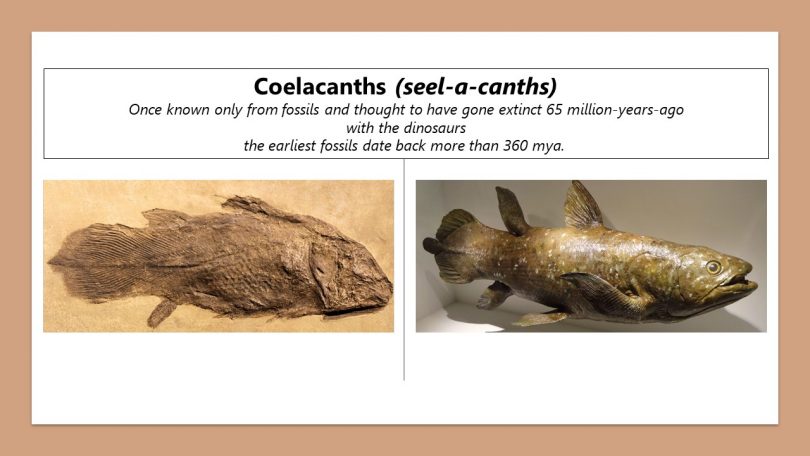 Evolutionary textbooks assumed a fish called a Coelacanth as extinct. Textbooks told that this amazing fish had evolved legs from its fins many millions of years ago. Textbooks told that these fish were ancestors of humans as evidenced by evidence such as embryonic development similarities. This special fish had likely walked out of the oceans and on to dry land on evolved legs. The fish was an obvious precursor for amphibians. The Coelacanth was a specimen of Darwinian transmutation in antiquity being well over 360 million years old and 65 million years extinct.
Unfortunately for this compelling narrative, in 1938 the Coelacanth was rediscovered to be alive. Swimming.

Evolutionary textbooks teach that the once assumed extinct fish called a Coelacanth (seel-a-canth) was long gone and only preserved in very ancient fossils. Conjecture proclaims that this special fish of antiquity had remarkably evolved legs from its fins.1 These fish dated back into the very distant past to more than 360 million years. They finally went extinct with the dinosaurs more than 65 million years ago.2 Evolution explains that fish are the ancestors of humans. Astonishingly, the Coelacanth, a Lobe-finned fish, literally walked out of the oceans on its evolved legs. The specimen was clear evidence of a precursor form (aka “missing link”) in the transmutation of fish evolving into frogs. This mysterious fish quickly became an icon in evolutionary textbooks that described that fossil evidence proved that this fish (or one very similar unknown fish) had evolved into an amphibian.3 There was no evidence of living Coelacanths that might indicate otherwise, which made the narrative compelling as support for transmutation.

Unfortunately, these marvelous evolutionary conjectures that adorned textbooks were stunned in 1938 when the Coelacanth was rediscovered to be alive in modern oceans. 2 More frustrating still, those “evolved fin-legs” were actually determined to be still mere fins used largely for swimming like any other fish. Later, after observations, the fish’s fins were discovered to be highly specialized and not for walking. These “limb-like” fins seemed to be uniquely designed and specialized to feed in submarine lava deposits where they venture at night to eat. 2 Apparently, no one rushed to update the textbooks in light of the evidence the conjecture continues despite new data and discoveries. The Coelacanth fish’s story of becoming a frog remains very important for teaching transmutation because transitional forms are very few and far between; therefore, this conjecture still adorns textbooks and websites that echo this nonsense.

The Coelacanth fish “is noted for its limb-like fins. The coelacanth…and lungfishes…(are) lobe-finned fishes. Their fins are attached to short limbs rather than directly to the body like in most species. These species…are more closely related to the tetrapods (amphibians, reptiles, mammals, and birds) than other fishes. Live coelacanths have been observed using their lobed fins in a paddle-like fashion, almost as if they are walking through the water column.”

A later quote in the same article admits that: “Only a relatively small number of specimens have ever been collected or observed.” Really? How then could the evolutionary community draw such massive and far-reaching conclusions? The answer is not found in the physical evidence and persists due to naturalistic assumptions.

Sadly, the Coelacanth fish never walked out of the ocean, is not extinct, uses it fins for feeding, and (of all things) swimming.

Science calls the Coelacanths “living fossils.” We attribute this designation due to this “mix-up.” First, the fish was thought millions of years extinct. Second, the fish was thought to have walked out of the ocean. Third, it became a frog. As an analogy, just like dinosaurs became birds, the Coelacanth became a frog. With all the prestigious attributes discovering is alive and not walking was inconvenient and perhaps a bit embarrassing.

Coelacanths were thought to be extinct for tens of millions of years, so the discovery of this species in the 1930’s and the subsequent discovery of the Indonesian coelacanth in the 1990’s represent some of the most significant natural history discoveries of recent times.” 3

Finally, if Coelacanth fishes are living fossils, then we argue why then aren’t crabs, lobsters, starfish, and frogs? These animals meet all the same criteria. Just like the Coelacanth fish, they are present in the ancient fossil layers.

So what is the difference? It seems the only difference again falls into assumptions and the storytelling. Virtually all animals at the family level (or lower) are present in the fossil record. Therefore, shouldn’t all these animals that ever lived but are in fossil layers be living fossils? Just because they never went extinct and are alive today does not seem like a logical differentiation.