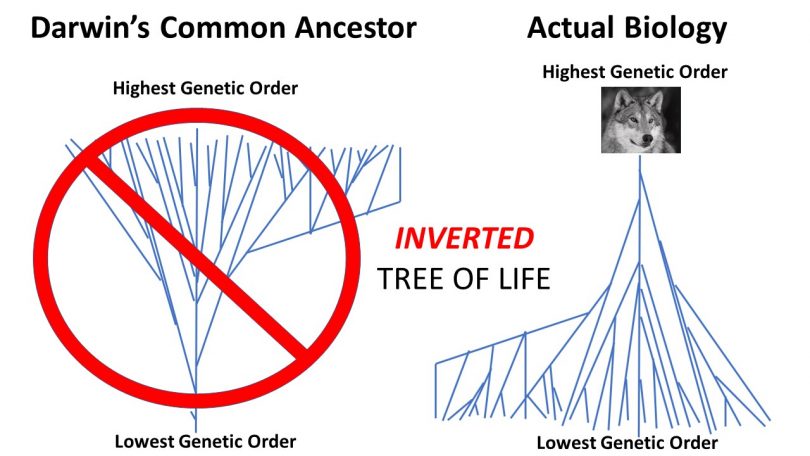 Darwin recognized the many problems his new theory faced due to many gaps that existed in the fossil record of 1859 when he published The Origin of Species. Darwin hoped the problems were due to a lack of evidence that later generations would uncover. Modern genetics and fossil discoveries has complicated things for Darwin– turning his imagined tree upside down!

This page is fully explained by this video:

Charles Darwin published The Origin of Species in 1859.  He proposed a brilliantly simple theory that sought to explain the diversity of all living species on earth.  Darwin formulated his argument with the watch analogy of William Paley in mind.  Paley reasoned that the existence of a functioning watch, like that of life itself, pointed toward an intelligent designer.   Darwin argued that living things, like a watch, functioned due to many smaller steps and components.  He proposed that each living system was assembled gradually over great periods of time, tiny step by tiny step.

Obviously, the watchmaker used intelligence for his tangible creation to function, but perhaps living things could self-assemble better and better systems, over eons of time, through the mechanism Darwin coined as “natural selection.”    While Darwin knew nothing of DNA information, he arrived at a simple and straightforward idea.  Simply put, natural selection took existing living organisms which discarded harmful variations (by death) while building on rare beneficial improvements (by reproduction).  This process was also called survival of the fittest.  The concept was simple and straightforward, and easy to understand.  Add in the benefit of eliminating any supernatural cause such as God caused the naturalistic theory to gain mass acceptance very quickly.  For the theory to remain to stand, these mechanisms of gradual variations which preserved the good while discarding the bad over millions of years must be true– if not, Darwin’s theory would fail.

Darwin recognized this reality.  He wrote in Origin of Species, “If it could be demonstrated that any complex organ existed, which could not possibly have been formed by numerous, successive, slight modifications, my theory would absolutely break down.” Darwin pointed to at the present, he could “…find out no such case.”

Darwin’s theory would use this process of natural selection and random mutations to build more and more complex organisms without purpose, design, or intelligence. Darwin thought just natural processes and random chance leaning on the idea of the fittest’s survival would provide all the guide rails needed for the theory to prevail.

The theory argues that genetics will gain information and complexity over time, which will cause simple organisms such as bacteria to ultimately evolve into the highest living forms, including human beings.  The theory does not directly deal with life’s origin as natural selection can only act upon existing life forms. Still, Darwin did imagine life first emerging on primitive earth in what he called a primordial soup.

Problem #1: For the diversity of life at the Cambrian, the layers should be filled with fossils

Darwin himself acknowledged that if every living thing had emerged by presumably millions and millions of small gradual variations over eons of time, then the earth must have been swarming with life.  Life comprised of nearly unimaginable variation as one life form slowly emerged from a precursor to a new distinct form.  Seeing simple organisms move from kingdom- to phylum- to class- to order- to family- to genus- to species.  But this was not the evidence of the fossil record in the 19th century (nor is it today).

Darwin explained in his book, “…the number of intermediate varieties, which (must) have formerly existed, be truly enormous. Why then is not every geological formation and every stratum full of such intermediate links? Geology assuredly does not reveal any such finely graduated organic chain; and this, perhaps, is the most obvious and serious objection which can be urged against the theory.”

The abrupt arrival of living organisms immediately after the Precambrian layer in the Cambrian layer (which we today call the event The Cambrian Explosion) revealed enormously complex organisms such as the horseshoe crab with an incredible 10 complex eyes, suddenly emerging without any precursors in any fossils.  These and many other complex organisms seemed to have emerged from thin air.  This was in no way helpful toward defending the new theory as it directly seemed to disprove it.

Darwin acknowledged such valid critiques: “The abrupt manner in which whole groups of species suddenly appear in certain formations (Cambrian) has been urged by several paleontologists as a fatal objection to the belief in the transmutation (evolution) of species.  If numerous species, belonging to the same genera or families, have really started life all at once, the fact would be fatal to the theory of descent with slow modification through natural selection.”

Problem #3: Genetic mutations cause harm and not good

Even historical scientists of the 19th century, before understanding genetics, were well aware that any large-scale variations observed in living organisms caused harm and never had been observed to make any living organism better; such occurrences were proposed by the theory to have been occurring all the time.  Louis Agassiz, a critique of Darwin’s new theory, pointed out that such changes in living things are observed to cause “degeneration” or for the organism “to become sterile.”  Agassiz pointed out that such changes “like monstrosities…die out.”

The fossil layers reveal mass extinctions—not mass “transmutations.”  One geologic period has six periods of time together called the Paleozoic Era, suddenly going extinct in a Permian extinction period.  Later, massive numbers of completely new never before seen organisms (including dinosaurs and turtles) emerge just like others had during the Cambrian Explosion.  Adam Sedgwick, also a critic of Darwin’s theory, pointed out that this pattern of arrival of new life forms (without any precursor forms in the fossil record) followed by extinctions (evidenced by the fossil record) were not the exception but the rule.

Fossil evidence uncovered a pattern radically different than the theory proposed.  Instead of simple organisms followed by more complex organisms, fossils revealed the first major and sudden emergence of whole organisms followed by small-scale diversification.  As an example, the trilobite emerged suddenly in the Cambrian layer with enormous complexity.  Later, trilobite fossils indicate minor modifications on the body type but no new form—trilobites remained to be trilobites.  Unfortunately for Darwin, it seemed the very fossil evidence he needed to prove his theory was best used to disprove the new theory.

Darwin’s explanation: the geologic data of the 20th century was still incomplete– he relied on future generation to fill in the gaps and vindicate his theory

Darwin proposed a solution to the dilemma.  He called the fossil record as discovered in the 20th century as imperfect.  “The explanation lies, as I believe, in the extreme imperfection of the geologic record.”  He stated that it would be up to future generations to make the discoveries that would ultimately validate his theory as true.

The 21st century proved Darwin right that many more fossils were discovered.  But would they suffice to validate his theory ultimately?  In Greenland in the 1930s where tetrapods, four-legged life forms such as frogs and lizards were uncovered.

In the 1990’s, many bird fossils with feather imprints were found in China.

In Pakistan whale fossils were unearthed.

But it was the Burgess Shale fossil discovery of 1909 that was most significant.  Here, completely new and never-before documented animals were discovered at the Cambrian layer. Again, just as with all the enormously complex animals of the Cambrian explosion, they had no precursor forms in the fossils below.

With all the new fossil evidence, Darwin’s theory was no better off. Instead, with the Burgess Shale discovery there were now more Cambrian whole animals to explain.

The Burgess Shale uncovered novel massively complex organisms never found anywhere else on earth.  Unfortunately for the theory, just like the many organisms found in other Cambrian layers, these too offered no precursor forms in earlier layers.  The Burgess Shale had made the fossils more problematic for Darwin’s theory and not less.  Now there were new incredible life forms that had to be explained.

Darwin expected to find fossil evidence as shown by the dotted lines in the illustration below. No such fossil evidence has ever emerged with the exception of illustrations in textbooks and frankly wild imagination. The missing precursors remain largely missing.

Below the left side illustrates a chart of actual fossil evidence recorded by sedimentary layers throughout the world. Evidence reveals that unique animal groups suddenly emerge in the fossil record and then undergo minor variations over geologic time (layering). There are extinctions, but evidence for the emergence of wholly new body types is non-existent.

On the right side, Darwin’s Theory of Common Ancestry– the basis of his book the Origin of Species. As we stated before, the supposed emergence of all kinds from ancient ancestors of simpler design did not exist in the fossil record when Darwin published his book in 1859, and future discoveries failed to vindicate him with discoveries.

To compare Darwin’s tree idea, we applied it to dogs. Here the common ancestor of all dogs has been assumed to be a Grey Wolf-like canine. However, as new dog breeds are isolated, they are accomplished not through an increase in genetic diversity but rather by bottlenecking or removing traits (genes) to cause the variety we see in dogs today.

If we follow Darwin’s idea where the most complex and diverse species are at the top of the tree, we must invert Darwin’s genetic tree. Here the Grey wolf is at the top. It has all the genetic information to generate all the various dog breeds. As new species emerge, they do so at genetic degradation or loss of genetic material. There is no known genetic function that can add genetic information by mere chance, as Darwin imagined.

We find that Darwin’s theory was disproved by the fossil record when he first wrote his book and remains disproved by masses of new evidence today. Genetics also has disproved his theory. Today we know that mutations are largely harmful or neutral—the large changes Darwin needed for his theory remain but wild imagination.

Thus, genetics and the fossil record support the accounts of the bible. We find that the purest forms remain from the originally created forms. God permitted genetics (also called Natural Selection) to permit many varieties to reproduce and survive. However, the idea that simple life forms would self-assemble and continually build complexity, even with the advent of eons of time, remains illusionary.