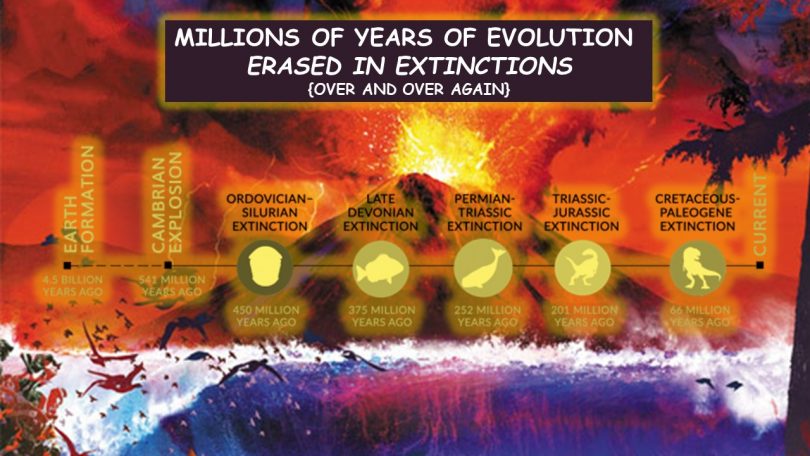 Textbooks proclaim that evolution is revealed by “transmutations” where blind and random natural processes build complexity effectively evolving a fish into a frog. While transmutations are slim pickings at best in the fossil record, one obvious counterproductive process is abundant: mass extinctions. These five mass extinctions at best work to retard transmutations, at worst these die-offs erase millions of years of evolution. Extinctions are an additional puzzle that must be explained by Darwinism.

The fossil record is often purported as evidence that defends evolution. However, as a major conundrum, evolution must answer how evolution happened despite five mass extinctions. If processes of transmutation, as Darwin expected, were “constantly improving” by “adding up the good” while “eliminating the bad” weren’t difficult enough, the hurdles of repeated mass extinctions and resets surely didn’t help.

Fossils reveal a repeated killing of almost all species– over and over again. Thereby effectively tossing a proverbial monkey wrench into the complex cogs of evolutionary machinery. Each extinction effectively stalled millions and millions of transmutational species. These mass deaths surely shriveled nature’s blind work time and time again.

Many evolutionary family trees got the ax, so to speak, during a mass extinction. These events are defined as the loss of least 75% of species in the geological blink of an eye — which can range from thousands to millions of years.1

Adam Sedgwick, a colleague, and critic of Darwin’s theory, illustrated these weaknesses in his writings. Sedgwick pointed out that the repeated pattern of sudden arrivals of novel life forms lacking precursors in the fossil record, followed by mass extinctions, were not the exception but the rule.

Fossils seemed to indicate that what took nature many millions of years to randomly assemble became obliterated in a geologic blink of an eye.

Mass extinctions clearly do not bode well for evolution as gradual changes due to small random variations over time.

1 “The Five Mass Extinctions That Have Swept Our Planet” By Gemma Tarlach July 2018 Discover Magazine https://www.discovermagazine.com/the-sciences/mass-extinctions

2 “Does the Fossil Record Support Creation and the Flood?” Jeff Miller, Ph.D. http://www.apologeticspress.org/APContent.aspx?category=9&article=5695