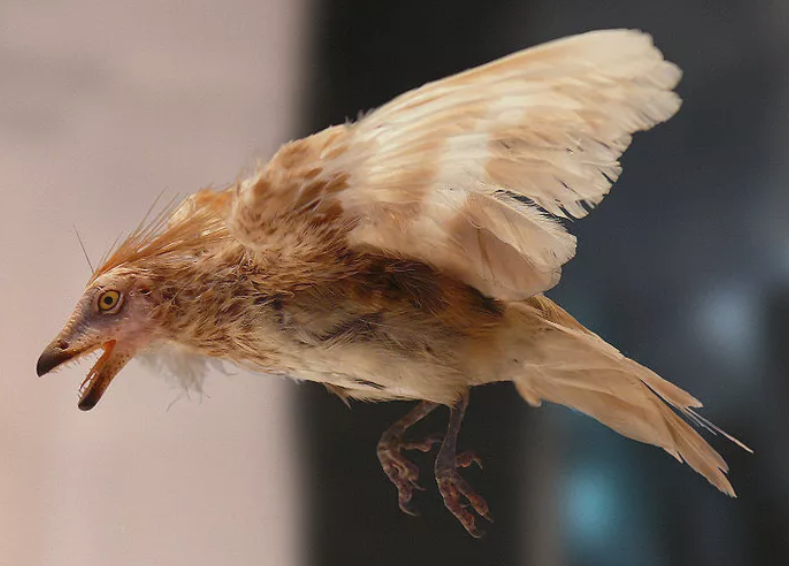 Evolution popularizers insist that birds emerged from dinosaurs. Therefore, they go to great lengths, many which defy logic, to get the round peg of data to fit into the square hole of the story. Unfortunately, the pesky evidence of bird fossils buried with and even before many dinosaurs keeps them busy with various theories as to why the evidence does not match the tale. As an example, they claim that birds evolved the ability of flight separately many times. Also, artistic impressions of fossilized “ancient” birds always skew toward a more reptilian look despite the striking skeletal and feather similarities such fossils have with modern birds.

Prominent paleontologists suppose, as a modern-day implication, if not outright pronouncement, that dinosaurs are “in fact” related to birds.  While some similarities are striking, so much so, perhaps many species originally categorized as dinosaurs should have been categorized as birds instead, such as the Velociraptor. This animal was actually the size of a modern day turkey and not the animal portrayed in Jurassic Park which more closely resembled the Deinonychus. Thanks to Hollywood these names are today very confusing. All because the name Velociraptor sounded cooler to Spielberg then Deinonychus. Either way, the story of birds evolving from dinosaurs was “taught” to us in the first Jurassic Park movie.1

(Dinosaur to bird evolution is) “one of the grander scientific hoaxes of our age—the paleontological equivalent of cold fusion.”

Many paleontologists go even further, claiming that dinosaurs never went fully extinct but are alive today as modern birds.  Much of the evidence which supports such claims comes from the idea that comparative anatomy alludes to evolution.   At the center of this controversy, based on the assumption of comparative anatomy, are so called “transitional fossils”.  A prime example of such a fossil (thought of as a half-bird, half-dinosaur) was dubbed as “Archaeopteryx”.2

Pop science considers the Archaeopteryx ‘dino-bird’ as an animal that was “perhaps unsuited for flight” (although many other scientific sites dispute this claim) despite its small size of smaller than a pigeon. All of paleontology notes that the fossil was remarkably well preserved, complete with feather impressions, for being supposed as being over 150 million years old. However, despite it obvious bird-like appearances, evolution disputes that this animal “is not directly related to modern birds”. Finally, evolutionists proclaim that this animal was “as much a dinosaur as it was a bird”. Ironically, they claim apparently against reason, that although the animal had a beak, a wishbone, and a full coat of feathers (just like all modern birds) this animal simply was not a bird and is the ideal example of a transitional form in the fossil record.3

“Lead researcher, Dennis Voeten of the European Synchrotron facility in France said, “We imagine (the animal flew) like pheasants (or) quails.”

“It’s quite clear Archaeopteryx was a fully designed bird that could fly directly from the ground. It possessed some unusual features for a bird, and possibly used its wings a bit differently from more modern birds, but it was a bird nonetheless.”