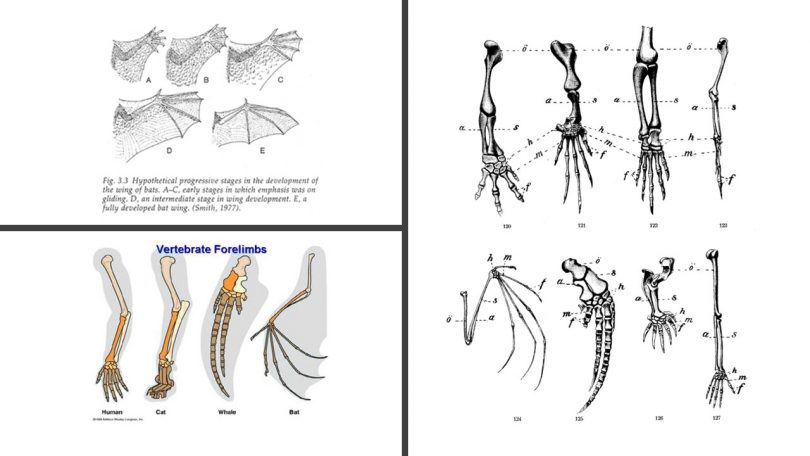 Common anatomical features of living organisms are often cited as evidence that evolution is true. On the surface the argument may seem strong, however, similarity does not prove (or disprove) evolution or creation for that matter. Designs differ, fish swim in water, birds fly in the sky, and mammals run on land. Each design has some expected similarities customized for their unique environments. Such similarities do not equate to evolutionary mechanisms as the cause.

If dinosaurs evolved into birds, then the transitional leg of the reptile becoming a wing over generations would have had to have been a bad leg long before it became a good wing.

While pictures of anatomical similarities of various life forms looks quite convincing, with further inquiry of actual scientific evidence finds these images find living organisms vastly different and highly specialized. The actual physiology of living organisms do not play as well with concepts of evolution as drawing of bone structures.

As an example, the feather does not allow the bird to fly, it is its metabolism, respiratory, muscular, and bone densities which work together to allow flight. Imagine that the very first bird that “evolved” with merely feathers and not all the other physiological requirements for flight (which are massively complex) was born dead or as dinner for a predator.

The level of sophistication and micro-complexity of each and every living creature is nothing less than a design marvel.

Consider the micro-precision of a butterflies wing which changes color by using reflection and not pigmentation. Such micro-manufacturing is yet far beyond human manufacturing capacity.

Homologous Structures (similar structures) are proclaimed as evidence for evolution but more accurately they proclaim similarity of design but only to the extent of shared function. Such as flight, running, respiration under water, etc. But here is where the similarity ends. Living creatures from viruses to migrating birds to mankind and everything in between, these magnificent life forms are examples of highly specialized design, filled with hundreds of irreducible complex systems which each must had been functioning from the beginning for survival.

Each genus designed marvelously by God, according to His purpose.