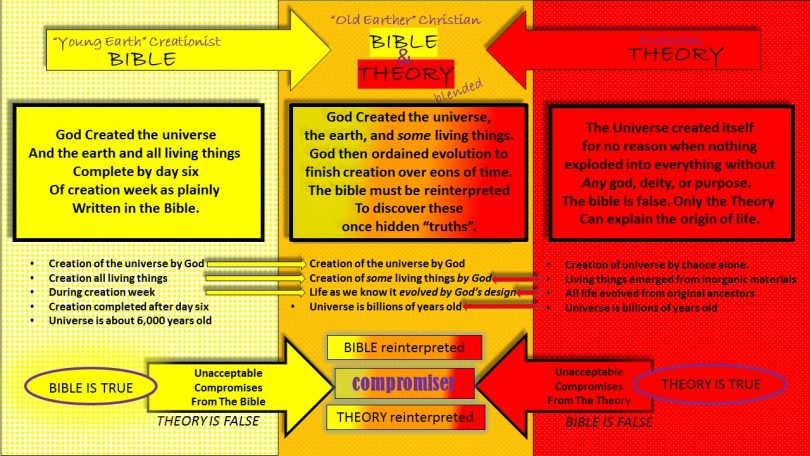 The theories within science are ever changing (as they rightly should be), however, biblical scriptures must stand unchanged. Or at least scriptures should remain unchanged regardless or even despite this month’s new scientific theoretical twist. Unfortunately, in many cases as perhaps not to appear “ignorant” toward worldly knowledge, Christians have found various ways to shoehorn in the scriptures to meet such theories of man. Sadly, we have seen creation week altered to accept millions of years taking away one of God’s greatest miracles and gifts of creation itself.

While the age of the earth is not a salvation matter– one can believe in millions of years and be wrong— yet still go to heaven. However, the scriptures call us to be faithful by not living our lives lukewarm (compromised partly to the world and partly to God). God plainly states that He would rather us be completely cold (in) or completely hot (out).

Many compromises have been proposed by perhaps well intentioned bible scholars, by suggesting theoretical constructs gathered from both within and outside the scriptures. Some of the most prominent concepts include: Framework Hypothesis, Gap Theory, Progressive Creationism, and Theistic Evolution.

Framework Hypothesis changes what the narrative of Genesis from a historical account to something allegorical, figurative, or semi-poetic. These figures of speech are found within the bible but not in Genesis specifically. In Genesis, the scriptures proclaim themselves as being historical.

This is the history (Hebrew “toledoth” meaning literally “generations”) of the heavens and the earth when they were created, in the day that the Lord God made the earth and the heavens…

Gap Theory places millions of years between Genesis 1:1 and Genesis 1:2 (or better stated as between day one and day two) of creation week.

This theory was originally suggested by Thomas Chalmers a young Scottish clergyman with an interest in geology. To answer geologist James Hutton and his deep-time views, Chalmers proposed this Gap Theory as a solution to the “problem” of deep time which did not reconcile with the creation week and time line within the bible. Other variations have emerged over the years such as “the modified gap theory” or “the pre-creation chaos gap theory”. In any case these theories all proposes a gap between the first two verses of Genesis as to find a place to input eons of time (millions of years or perhaps an immeasurable number of years) for this to have taken placed.

Original Hebrew of “without form” is “Whto tohu” meaning confused. For the word “void” original Hebrew is “Whb bohu” meaning empty. Furthermore, we also find that the initial conjunction, “And,” is actually an adversative conjunction (“but”) and is so rendered in both the Septuagint and Vulgate translations.(1). Which often suggests a significant time delay.(2)

Putting this all together suggests the following rendering:

“But the earth had become without form, and void; and darkness was upon the face of the deep.“

There appears to be an interval of some kind—perhaps eons—between verses 1 and 2. It would seem that the earth was not originally “without form and void,” but had been subjected to some kind of catastrophic judgment prior to the sequence that continues in Genesis 1. This possibility can also be used to try and explain the interval when Satan fell. We know that the angels were created prior to the Earth.(3) We find Satan had already fallen in Genesis by chapter 3. The mystery is, when did Satan fall? It appears that there are substantial Scriptural references to his rebellion, his agenda, and the subsequent catastrophic judgment that ensued.(4) This also raises the whole issue of the origin of evil and why didn’t God simply wipe out Satan and sin completely? It is also disturbing to recognize that Satan tempted Jesus by offering him the “kingdom, power and the glory” in the temptations recorded in Luke, because the earth does belong to Satan now.(5)

In conclusion, the Gap Theory has some interesting biblical and scriptural perspectives regarding creation week between day one and day two. However, these perspectives are largely those regarding the creation of angels, the subsequent fall of Satan (prior to the Garden of Eden), and the origin of evil. However, the Gap Theory does nothing to promote or answer the concepts of naturalism and evolution. Even if you placed billions of years between day one and day two of creation week, this does nothing to explain the subsequent order of created elements such as the universe, stars, and living organisms as contrasted to evolutionary models. The elements of evolution cannot be reconciled back to the scriptures as to be both inclusive of common ancestry evolution and the descent of all animals and the order of creation as delineated during creation days three through six. This problem cannot be resolved by this gap regardless of how many years one places into it.

Hugh Ross has referred to young-earth creationists as having “archaic notions” where “scientific absurdity” and “myths” show up on the first page (of the Bible). This position clearly indicates that Mr. Ross understands the clear intent and meaning of the biblical text as meaning creation over six days but instead offers a naturalistic rejection. A rejection as to not be “archaic” or “absurd” when in front of the scientific community in church or at large. Perhaps, as an odd attempt to appease the community of evolutionists within the church, or perhaps as a ” save” to even those largely atheistic groups outside the church who ironically (either way) find beliefs in the bible largely moronic, he believe this theory. (6)

Progressive Creationism accepts Astronomical Evolution (Big Bang) and Geological Evolution with both embracing the billions of years worldview. Although this theory does not specifically accept Biological Evolution, it does teach that God created millions of creatures (species) in “batches” over billions of years. All these creatures were created in batches within the accepted evolutionary time scales and order of events including: death, struggle, extinction, and disease. Additionally this theory does not accept the clear Biblical teaching of the global Flood, but it is instead taught as a local flood. This theory also believes in human evolution and early (soulless) hominid ancestors that existed before Adam and Eve. (6)

Theistic Evolution accepts the conclusion that God created life but used evolution to generate all the diversity and species we find today. This is disposing of the biblical authority and character of the Creator.

Theistic evolution is the idea that God started or directed evolutionary processes. This view makes God a bumbling, incompetent Creator and the author of death and suffering as it puts them before mankind’s sin. It calls into question the truth of God’s Word and his character as an all-powerful, loving God.

In conclusion, any of these various compromises can be used as to attempt to reconcile mankind’s theory of naturalism and evolution with its supposed billions of years required for evolution into the bible and its obvious six day creation account. These compromises will justify that one does not have to reinterpret the scriptures but proclaim that the account of Genesis was not written as a historical account but a figurative or poetic one. This is proclaimed despite the fact that scriptures (Gen 2:4) proclaim the creation account as historical. Scriptures use the six day creation event to describe the Sabbath: work six days and rest on the seventh day just as God created the Heavens and the earth. Evolution and Creation are irreconcilable.

Remember the Sabbath day, to keep it holy. Six days you shall labor and do all your work, but the seventh day is the Sabbath of the Lord your God… For in six days the Lord made the heavens and the earth, the sea, and all that is in them, and rested the seventh day.”

Notes and Resources for Gap Theory from Chuck Missler: