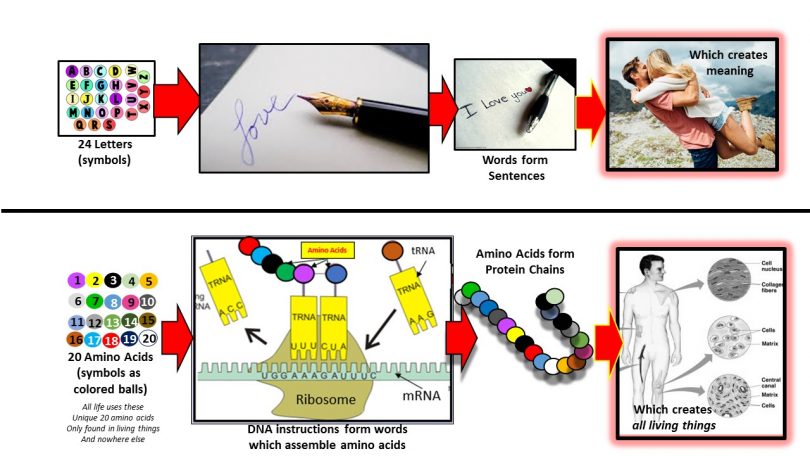 Amino acids are chemical molecules that are chained together by the living cell to form proteins. As an analogy, these 20 unique amino acids can be compared to letters of an alphabet. Letters that are used to spell out sentences as they are chained together and become living flesh (proteins). It is both stunning and a massive puzzle for evolution to explain the emergence of language as used by DNA ever emerged. How could language (which requires intelligence, design, and purpose) ever be generated through purely naturalistic, spontaneous, and random chances? The short obvious answer is it could not! Such an event of a language forming by chance is oxymoronic; Intelligence, design, and purpose are opposites of naturalistic, spontaneous, random chance.

Three letter “codons” copied from DNA by RNA “messengers” are used to translate, like a ticker tape, twenty unique amino acids into protein chains.  This is called protein synthesis (described in the video to the left).

The analogy here is amino acid “letters” write out information into living flesh via code (similar to computer programming) as words and sentences (commands) transforming chemicals into living proteins and cells.

Of course, protein synthesis is very complex and actually beyond such a simple analogy, however, the analogy can be helpful in clearly illustrating the significance of informational code as the driving force behind life itself.

DNA is Information. (See image below). Language, such as the DNA process of protein synthesis, uses all the components of information including a “statistical signal”, “syntax”, and “semantical” code.

Information is “knowledge communicated or received concerning a particular fact or circumstance.”

(3) Code used for the creation: communication, storage, or transformation of the content of information. (DNA storage, RNA communication, and Amino Acids via tRNA transform into protein chains).

Information (by scientific definition) cannot arise through purely naturalistic processes as such an occurrence would be paradoxical. Information requires Content, Intelligence, and Code none of which can arise without both purpose and design.