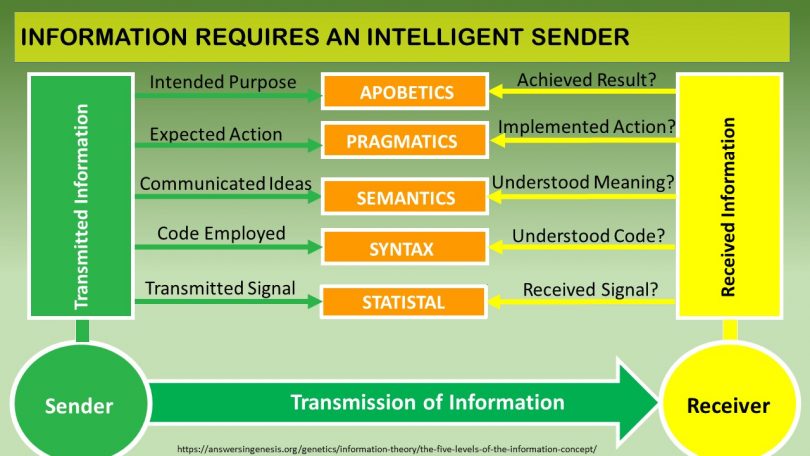 Information is a fundamental entity like energy or matter.  Information always has a causative factor and arises never by random chance but always by intentional act of an intelligent sender.

There are five aspects related to the origin of information.

(2) Code exists only as a result of a deliberate action.

(3) All information requires a sender.  Without code there is no information.  Code can only be completed by pragmatically deciding to do so.

(5) All information is evidence of volition or will associated with its creation.   All code has an intended purpose.

How can language be recognized?

Language can be recognized in symbols.  Components of language include: Uniquely defined, irregular sequence, irregular symbol, not merely repeating sequences, some repeating of sequences, and has a clear and distinguishable structure.

As observable in science, life only comes from life.  Life is only manufactured in the living cell via a  complex ‘recipe’ called a genome which resides within the DNA double helix.  The genome manufactures every protein (using amino acids as building blocks of proteins) to create all forms of living organisms including cells, flesh, bacteria, viruses, plants, trees, shell fish, coral, reptiles, birds, fish, mammals, and of course humans.

DNA stores these vast reserves of information within a nano-sized double helix structure (with over 3.2 billion base pairs letters of information) tightly wound within nearly every cell of the human body (red blood cells don’t have DNA for some very good reasons).  Very carefully each genome copies itself while going to great lengths to avoid copy errors (or non-reproductive non-allele mutations) by constantly testing and correcting for accuracy.    In fact, 2/3 of all cancers are due to random spontaneous copying errors (mutations) such as these.1

Lastly, a protein paradox emerges from this evidence, a classic  ‘chicken or the egg’ dilemma.  Seeing the DNA structure contains proteins, and proteins are only produced by DNA– which came first the protein or DNA?