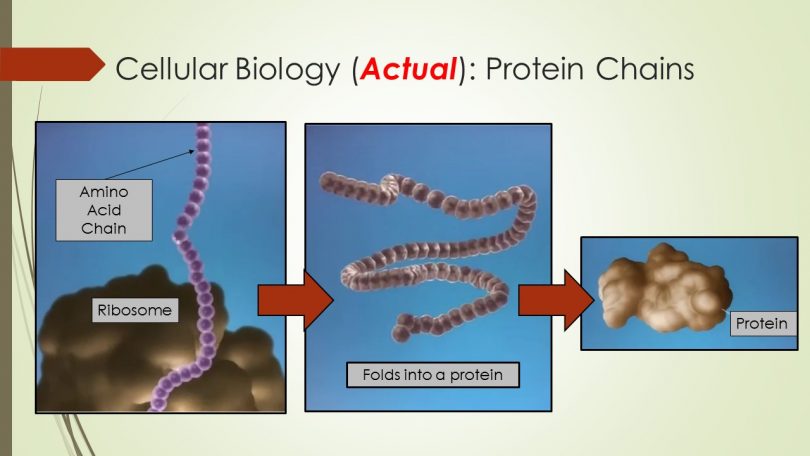 Among the many theories regarding the origin of life a favorite has been the idea that protein chains randomly formed the first living cells. While there are many problems which this theory, the major issue is proteins are known to only be synthesized by the living cell with the instructions provided by DNA information. The idea of protein chains forming by random spontaneous chance is stranger than fiction and would require multiple mathematical miracles.

Protein synthesis is one of the most fundamental biological processes by which individual cells build their specific proteins. Within the process are involved both DNA (deoxyribonucleic acid) and different in their function ribonucleic acids (RNA).

The process is initiated in the cell’s nucleus, where specific enzymes unwind the needed section of DNA, which makes the DNA in this region accessible and a RNA copy can be made.

Thereby collecting the “recipe” to make the specific protein called for by the living organism within the cell. This RNA molecule then moves from the nucleus to the cell cytoplasm, where the actual the process of protein synthesis take place.

All cells function through their proteins. As all science knows today, only though the pre-existing DNA and RNA function of the living cell can proteins be synthesized. Therefore, the idea of the first cell emerging by either somehow self-assembling a protein chain or collecting the structures to self-assemble RNA or DNA from (say) a meteor or in a lab such as the Miller Urey experiment are absolutely ridiculous.

A protein is a chain of amino acids averaging about 350 amino acids comprised of 20 different amino acid “letters”. The information provided by the DNA provide the instructions how to assemble the protein chain. The chain is assembled amino acid by amino acid via Transporter RNA or (tRNA) which each carry their unique amino acid (one of the twenty). The tRNA “loads” the amino acids into the ribosome for chain assembly.

The above steps repeats until there are uncoupled codon sequences on the mRNA – thus the chain of amino acids grows longer. Once the sequence of amino acids is successfully assembled in a protein, the two ribosome sub-units separate from each other, to be joined again for later use.

The actual sequence of amino acids forms the primary structure of the proteins. Depending on the exact composition and order of the amino acids in the protein sequence, the chain folds into a three-dimensional shape. When this happens the protein is complete.

The process of protein synthesis takes place in multiple ribosomes simultaneous and all throughout the cell cytoplasm. A living cell can synthesize hundreds of different proteins every single second.

Science confirms that the cell is made by lipid cells and proteins made via the information provided by DNA in the cell; paradoxically, DNA is replicated within the living cell which thereby manufactures all the proteins needed and used by the living cell. This process continues with each cell in the living organism. The process of protein synthesis cannot be simplified or accomplished without the information provided by DNA. Each function of the complex micro-biological machine must be fully functional in advance of the subsequent stage.

Spontaneous emergence of life via random and spontaneous protein chain formation has zero chance of ever occurring!