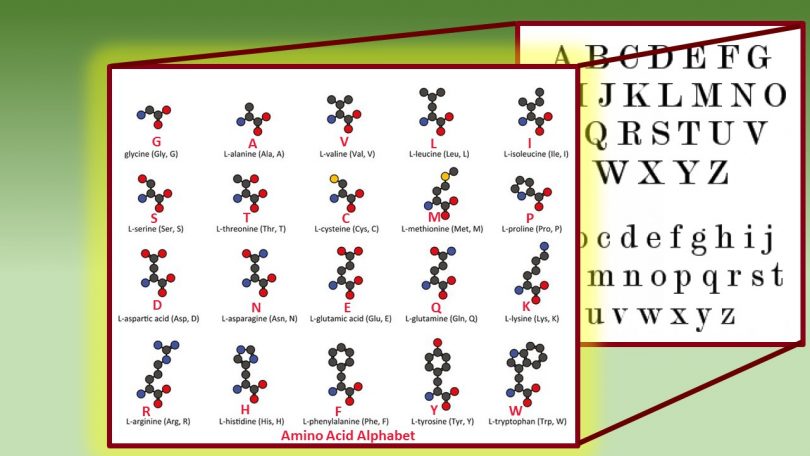 Language is used to communicate and derives from intelligence. Such is the language of life found within amino acid “letters”. The twenty amino acid letters are joined together (as protein chains) by DNA coding instructions to form living flesh. Explaining such evidence as support for spontaneous and random emergence defiles common sense.

Not a single amino acid came from or was ever produced by the famous Miller-Urey experiment, imagined primordial waters, meteors, comets, ice crystals, bubbles, liquids or solids of any kind.  Not one comes from outside of life itself.

These amino acids are assembled into a chain inside the living cell to ultimately become flesh we call protein.  It is reasonable to think of DNA base pairs as ‘the code’ (quaternary code of 4 letters: A,C,G, & T) which are the recipe used to assemble ‘the letters’ into protein chains to later be folded into protein emerged from nature or naturalistic processes.

The twenty amino acids each have assigned to them both three-letter (can be upper or lower case) and one-letter codes (upper case). This makes it quicker and easier for notation purposes and are worth learning.

The format of the list is: amino acid name – 3 letter code – 1 letter code