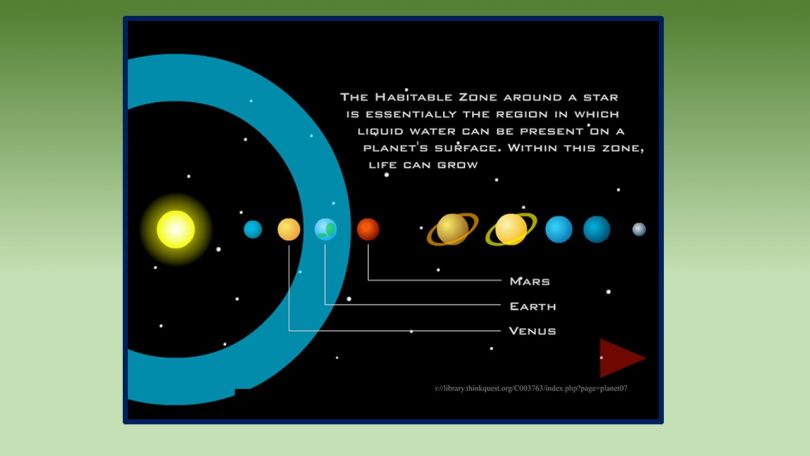 Scientists like to refer to the unique characteristics the earth and where it resides as “the Goldilocks Zone”. The idea of naturalism imagines that other regions of the universe “must be” ripe with life if they can be found within this zone. Such expectations are grounded in the assumption that naturalism is fact and therefore life spontaneously emerged from chemicals by mere chance. They continue their search despite the current inability for scientists to explain the origins of life where it does actually exist here on earth. The reliance of such logic falls under the “it must have happened because naturalism is true so it must have happened in other places in the universe” assumption—although we have no idea how it happened to begin with!

Goldilocks Zone notes that if the earth were a little closer to the sun it might be like hot choking Venus; if earth were a little farther out it would be cold and arid like Mars. 1 Somehow, perhaps through a miracle of biblical proportions (literally) or by amazing evolutionary serendipity, we ended up in just the right place in the universe.

We also received from the random universe, also by amazing serendipity, all the perfect molecular ingredients operating within tens of thousands of delicate ratios required for life to flourish.

Researchers see this as living in “the Goldilocks Zone.” This zone involves the specific perimeters surrounding the delicate relationship between the planet and the star that it orbits. A planet is in this zone when the star has just the right conditions to find liquid water on a planet’s surface although how the massive stock piles of water arrived is unknown.

Water is so vital to our survival, but strangely enough, we don’t know the first thing about it—literally the first. Where does water…on planet Earth, come from?

According to evolutionary concepts and conjecture, life comes from water. This mindset finds NASA and other scientific fields searching for water on other planets in the universe as a top motive for exploration. 1

Many of these scientists are perhaps geniuses, or at a minimum very intelligent, are either willfully lying or they are ignorant to basic chemistry– the second option is essentially impossible. The reality of even basic chemistry reveals that while water is necessary for life to PERSIST, water itself is DESTRUCTIVE to life.

Water and oxygen oxidize and destroy amino acids and so called “protocellular” structures.2 The issues with water and oxygen are actually massive problems for evolution 2 and are paradoxical to life.

Whatever else transpired at the time of life’s recognizable origins on Earth it seems likely that a critical step was the formation of cells – membrane enclosures – in which more complex molecules could congregate at concentrations high enough for interesting chemistry to take place.  But there’s a catch: salty, ion-filled ocean water and ionic magnesium and iron, present in compounds like RNA, all act to destroy the fatty-acid spheres that we think could have been the first proto-cells.

Scientific American “Protocells, Bombardment, Martian Erosion and Biofluorescence, What do these things have in common?”
By Caleb A. Scharf, August 2019

2 Scharf, Caleb, Scientific American “Protocells, Bombardment, Martian Erosion and Biofluorescence, What do these things have in common?” Aug 2019