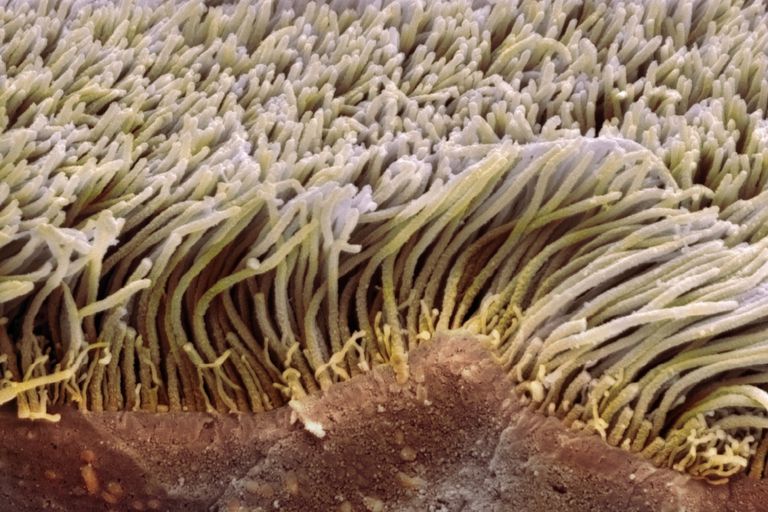 Evolution categorizes living things on a proposed ‘Tree of Life’ where “simple” organisms reside at the roots and the more “complex” animals are at the highest branches. Therefore, when such simple organisms such as cilia are found to have multiple complex functions in life they are often viewed in astonishment. Such surprise is not due to the organelle function (which is astonishing) but really because of the beginning assumption that envisioned evolution as simple forms, yet science continues to reveal that life at any level, is anything but simple.

Darwin (and other scientists of the late 19th century) thought of cells as mere “blobs” comprised of an imagined compound they called “protoplasm”. For all science knew during this era, perhaps life could have spontaneously emerged from such unknown sludge. However, modern science has revealed how exponentially wrong such thoughts were.

Today, cells are thought as being “factories that contains an elaborate network of interlocking assembly lines, each of which is composed of a set of large protein machines.” 1

Inventions of various technologies such as the electron microscope and X-ray crystallography has allowed biochemists to see micro structures down to the atomic level. These technologies have put such primitive theories of cells being “blobs of protoplasm” into the trash can, by “revealing a micro-world of mind-boggling complexity”.2

As an example, the once thought simple cilia “hair” with its whip-like tail, was discovered to be quite complex. Additionally, the structure was found, like most all molecular machines, to be constructed in beautiful symmetry, revealing a masterpiece of apparent design.

Yet, (seeming as a point of clear idiocy) the worldview of evolution degrades this micro-marvel cilium as useless: “cilia are vestigial organs inherited from an ancestor whose cells…now have no purpose in multi-cellular organisms.” 2

Cilia’s function serves as a propeller working much like an oar of a boat.  Sometimes used to move the cell itself while in other cases the hairs are used to move things away from the system; Such as the cilia in the lungs work to expel contaminates. The structure consists of a sticky membrane coated bundles of fibers used to connect the interior to the exterior of the structure.  When the cilium is sliced cross ways (see image below), the electronic microscope reveals nine symmetric micro-tubules comprised of a protein called tubulin. These proteins are are “rod-like structures that come together like bricks forming a cylindrical smokestack”.2

The structure is constructed from two fused rings.  Further examination reveals that one of the two rings is comprised of thirteen individual strands of micro-tubules.  The second ring is comprised of ten fused micro-tubules which are fused to a ring of thirteen strands.    The molecule is water resistant and has a compact shape comprised of positive charges which attract negative charges—they are designed like stacking tuna cans—one locks on top of the next to form long chains.2

Amazingly the cilia function resides within the structure itself. Experiments have shown that when such cells are spun in a centrifuge the cilia tails can be removed from the cell and gathered into a separate vile. Remarkably these cilia tails continue to whip even when apart from the cell! Experiments have shown that cilia operates independent of the cellular function by using its own energy source (ATP) to operate independent of the cell. Further experiments revealed that the motor for cilia is contained in the dynein arms because when these arms were removed the structure becomes paralyzed.2

Knowing the structure of a complex machine and knowing how it works are two very different matters. As an example, one could open the hood of a car or open up a computer and take pictures of all the components from every angle and still gain zero insight as to how the parts contribute to the function of the system.

More and more is being discovered each year regarding cilia as technological techniques allow further resolution and ultimately more secrets. Revealing both obvious and less obvious functions throughout the many molecular systems of the living organism that uses cilia in its function. Additionally, it has become clear that perhaps there are yet many more functions this structure may provide which are still not fully understood.2 As technology continues to reveal more and more clarity and mind-blowing detail of such molecular systems, these once thought “simple” structures, like all function of the cell, are found in reality as horrendously complex. Such complex systems are irreducibly complex and shatter the concept of gradual “step by step” evolution, playing a role in the deconstruction of Darwinian explanations for life.

Perhaps “ten thousand papers have been published” over the last few decades in “major biochemistry journals such as Science, Nature, Proceedings of the National Academy of Sciences, Bio-Chemistry, Journal of Biochemistry, Journal of Molecular Biology, Cell and numerous others.” The articles reveal that each writer assumes “someone must know” how cilia evolved gradually, step by step, but their particular article has no answers as to how or if it may have occurred. 2

“Many people are lead to assume (that) Cilium evolved…but a search of the professional literature proves them wrong. Nobody knows.”2

1 Bruce Alberts, “The Cell as a Collection of Protein Machines: Preparing the Next Generation of Molecular Biologists,” Cell, Vol. 92:291 (February 8, 1998).