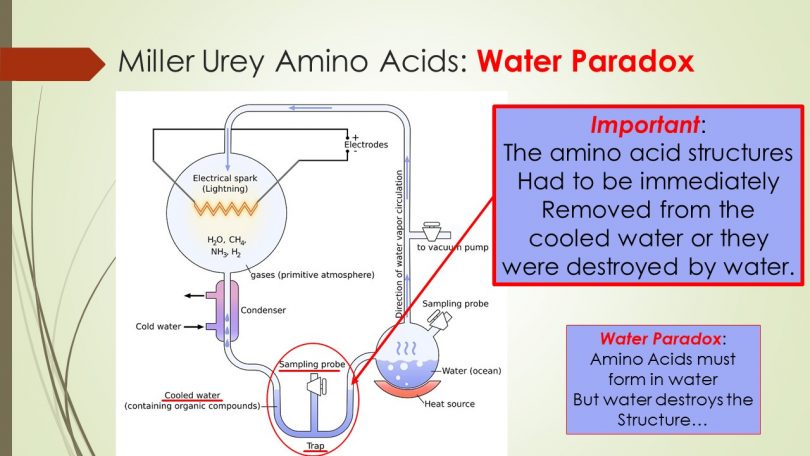 The water paradox: water is proposed as the place for the first amino acid formations, yet water destroys chemical compounds including amino acids.  The membrane of the living cell protect the amino acids inside the cell from the harmful effects of water, while other special protein portals within the living cell allow for water in and out of the cell.

Living things are all comprised of cells– humans are comprised of trillions of cells.  Water may seem harmless enough to life, in fact scientists often site the presence of water as the essential ‘ingredient’ for life.  The narrative continues that the very presence of water is why we have life on earth and its presence elsewhere in our solar system or universe holds these same promises for evolution.

However, what scientists leave out of their water narrative is, anything outside the cell safety of the cellular membrane, finds water destroying living things like an acid.  This oxidation obliterates any molecular (cellular) structure, amino acids, RNA, DNA, or organelle if left unprotected outside the cell membrane which holds the gel-like fluid called cytoplasm.

In reality, the living cell carefully controls and monitors both the intake and release of water through specialized protein receptor (portals) as controlled by highly specified enzymes.  Fortunately for all life on earth today these protections are all ready in place thanks to the informational (blueprint) code provided by DNA as to how to manufacture such amazing cells.

But this does create a very difficult challenge for evolution and the emergence of life: How and where did the first amino acids assemble into protein chains since water is destructive to living things?

Evolutionary conjecture claims that life ‘must have’ emerged from non-living chemicals many billions of years ago.  There are many various theories on how or where this might have occurred but most agree that life likely began in water.  More precisely, the proverbial ‘warm body of water’ or ‘primordial soup’ are the medium where the amino acids might have spontaneously formed into the first protein chains.  Setting aside that the twenty amino acids used in all life on earth only derive from other living things (plants and animals only), might such a process by possible? The Miller-Urey experiment sought to find out.

The famous experiment attempted to find out if amino acid structures themselves might be produced in an atmosphere exempt of any free oxygen (with has many additional problems such as no ozone layer) but these amino acids had to be immediately removed from the liquid due to the persistent problem of oxidation on chemical structure formations.   (see image to the left)

This has been called the water paradox because if water is required as a medium for amino acid formation and the same water destroys amino acids due to oxidation they are paradoxical.

The facts of biology: The membrane of the living cell protects the all internal components including amino acids from harmful effects of water. Water as needed by the cell is regulated by special protein portals allowing water in and out for respiration of life (among many other known functions).

Water itself does not indicate or promise life– special design and information within DNA does.