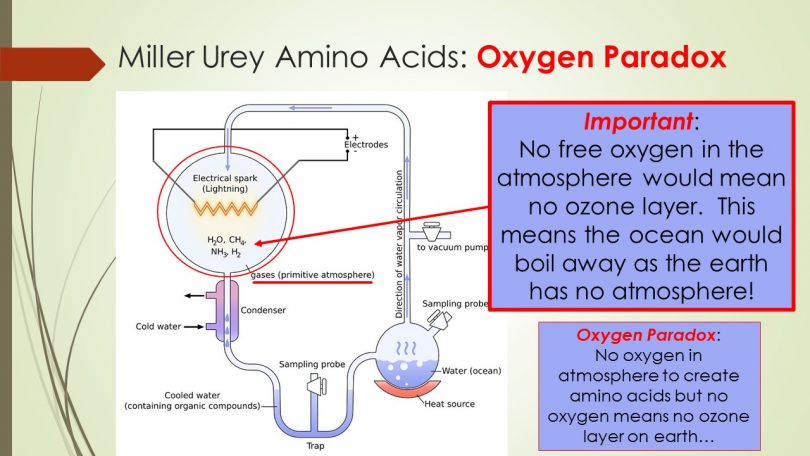 The experiment supposed an early earth atmosphere void of any free oxygen. The chemists knew that oxygen would destroy any attempt to synthesize amino acids “spontaneously” through the design “random” function of their experimental apparatus. However, such an oxygen free atmosphere would equate to the earth also not having an ozone layer. This is paradoxical because such conditions would render earth lifeless as the suns solar radiation would destroy cellular life while high temperatures might boil away our lakes and oceans.

An oxygen paradox emerges when the Miller Urey experiment relied on an “early earth” void of free oxygen designed to replicate an atmosphere which would allow chemical formations such as amino acids without the risk of oxidation presented by free oxygen.

The apparatus used by the chemists was designed to be free of oxygen because (even a first year chemistry student learns) that oxygen destroys cellular structures through a process called oxidization. Oxidization attacks cellular structures (like an acid) and thereby would thwart the goal of The Experiment designed to generate amino acids. Oxidation would prevent amino acids from forming.

One does not have to be a genius to realize that an earth void of free oxygen creates multiple problems for life. The most obvious paradox is the fact that no free oxygen also would equate to no Stratospheric Ozone layer. Ozone chemical structure is 03 (three bonded oxygen atoms). This is obviously very problematic for life because the ozone layer absorbs ultraviolet light, protecting all life-forms on earth from the dangerous effects of solar radiation from the sun. Scientists theorize that an early earth without an ozone layer would have caused all of our oceans to have boiled away. No water would create a new problem for amino acid formation which is imagined to have formed originally in the “primordial soup” which is mainly water.

Miller-Urey assumed an “early atmosphere” free of oxygen (really to stop oxidation) during their experiment which unfortunately also eliminated the ozone layer and ultimately any possibility for life.

The ozone is crucial for life on Earth. (Without the ozone) the Sun’s intense UV rays would sterilize the Earth’s surface.”

The absorption of ultraviolet radiation by ozone creates a source of heat, which actually forms the stratosphere itself (a region in which the temperature rises as one goes to higher altitudes). Ozone thus plays a key role in the temperature structure of the Earth’s atmosphere. Without the filtering action of the ozone layer, more of the Sun’s radiation would penetrate the atmosphere and would reach the Earth’s surface. Many experimental studies…have shown the harmful effects of excessive exposure to radiation. “

The paradox of no oxygen in earth’s atmosphere could never support any life. The reality is The Miller Urey experiment was an intelligently designed process thought to cause amino acids to “spontaneously” form despite the reality that the entire apparatus was purposefully designed and everything but random. The hopes were this “early atmosphere” free of oxygen might create amino acids. Amino acids which are assumed as potentially the building blocks for the first proteins used by life.

Other problems discovered by the Miller Urey Experiment include but are not limited to the water paradox, amino acids used by life only manufactured by other living things, no meteor amino acids used in life, and the process included intelligent design by scientists and not random processes filled with paradoxes.

An honest scientist concedes this paradox and fatal blow to the The Miller Urey Experiment. A dishonest naturalists look the other way or perhaps parades the concept with ignorance. Most never bother to question it at all and simply proclaim its “truth” or ignorantly as “scientific fact”.

Nonetheless, regardless of all the paradoxes, the drum beat for evolution keeps pounding. Images of The Miller Urey experiment adorn museum displays, universities labs, textbooks, educational television programs, and the internet.

Honest scientists, professors, and educators of chemistry and biology take their students to see such displays as “life in a lab” bite their tongues. These educated individuals know that the entire display, complicated by many paradoxes is deceptive at best and a flat lie at it’s worst.

An early earth free of oxygen might have formed some odd amino acid chemical structures but the environment would be missing an ozone layer, boiled away oceans, and an environment inhospitable for life.