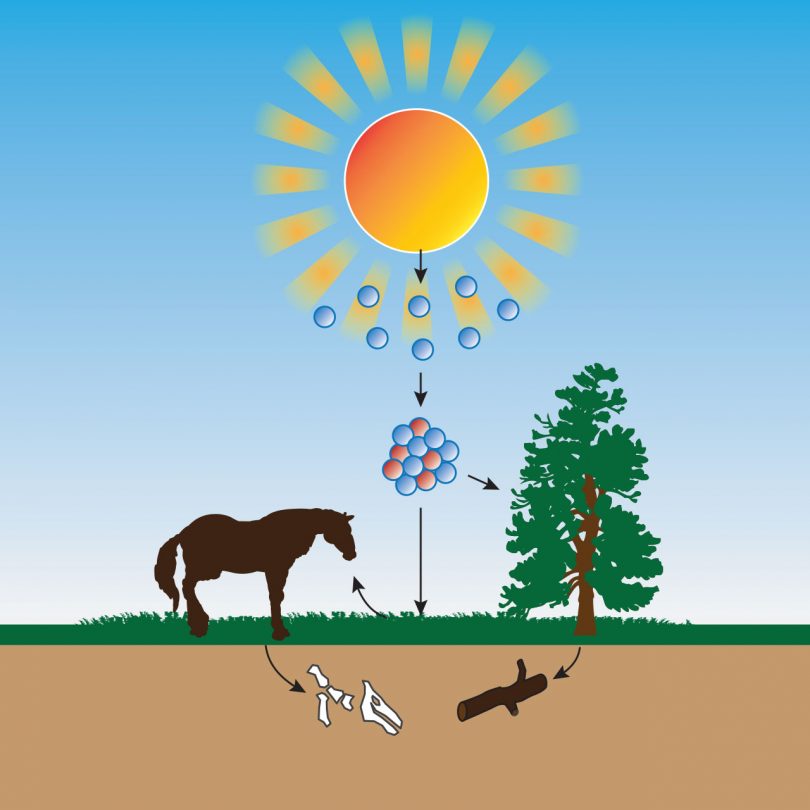 As pointed out throughout this website, each dating method has its limitations, assumptions, and variables. As it turns out Carbon-14 dating on shells has been found to be completely unreliable even found dating living Mollusk shells as being thousands of years old! This error is due to unique chemical reactions that add “dead carbon” into younger samples which give false older ages. Despite these known errors, textbooks ignore it, perhaps partly because such old ages tell the story of evolution and eons of time.

How Carbon 14 gets into samples

Carbon-14 is a form of radiometric dating that is unique because it is the only method used to date once living carbon-based organisms. Carbon based life forms metabolize carbon and absorb radioactive carbon-14 into their living cells. When the life form dies the metabolism, process stops and therefore the remaining radioactive carbon-14 begins to decay. As the total amount of carbon-14 decreases over time the remaining carbon-14 can be used to estimate how long the specimen died. Carbon-14 stabilizes quickly and thus has a short decay cycle. This means in only 5,730 years half of the originally assumed radioactive material will have stabilized and completed one half life. This means that if Carbon-14 remains in any sample it is only thousands of years old and never millions of years old because all Carbon-14 would have decayed within thousands of years.

Consequent errors of shell radiocarbon dates may be as large as several thousand years for river shells. Living mollusk shell dated to be 2,300 years old “.

These errors occur due to a phenomena called that reservoir effect. The springs, from which the snails came, were fed by carbonate aquifers. As this water percolated through the enclosing carbonates, it dissolved limestone and dolomite supposed as ancient. The dissolution of limestone and dolomite introduced considerable quantities of “dead carbon” into the groundwater. As a result, the groundwater which fed the spring and in which the snails lived was significantly deficient in carbon-14 relative to what is found in the atmosphere. When the snails made their shells, they incorporated an excess amount of “dead carbon,” relative to modern atmosphere, into their shells, which resulted in the excessively old apparent date.

In another instance a Fairbanks Creek Mammoth had its leg tested at one lab and its skin at another and the variance was greater than 6,000 years – for the same specimen.

Materials from layers where dinosaurs were found dated 34,000 years”

Dinosaur bones have been discovered to have soft tissues and even red blood cells.

Evolutionists admit that if the date does not fit (the geologic column) they throw it out. “If a C-14 date supports our theories we put it in the main text. If it does not entirely contradict them, we put that in a footnote. If it is completely ‘out of date’, we just drop it.” C-14 dating, radiocarbon variations twelfth Nobel Symposium New York, 1970, p.35

If the assumptions used are accurate and rate of changes have remained constant throughout all time, then of course the assumptions are conclusive. However, if any assumption is found to be fluctuating or inconstant (for any reason) then the results must also be deemed inconclusive or not accurate.

It is known that the earth’s magnetic field has changed (and is decaying still today). This means there were lower levels of carbon 14 in the past which would equate to false older ages of samples when compared to modern day carbon 14 levels.

Today only about 21 pounds of Carbon 14 is made per year in the atmosphere. It is known that radiometric carbon 14 is forming 28-37% faster than it is decaying. While still unsure what is causing the change–the previously held scientific belief that the rate of decay is constant may not be true. This discovery certainly seems to challenge that theory. The implications can have far reaching affects not only in science and medicine, but also history and archeology among other things.

An alternative interpretation for all the carbon-14 found around the earth is a global flood catastrophe as described by the bible. This event would have laid down massive layers of rock strata and left billions of fossilized remains as evidence and this is exactly what we see. Whatever the source was for the abundant carbon-14 still left on earth and in fossils and rock layers, its presence in nearly every sample tested worldwide, is a direct challenge to the mindset of millions of years.

Most all radiometric dating methods are based on assumptions about events which happened in the unobserved past. Older samples such as fossils or ice age relics must be dated using assumptions because the original conditions and rates of decay are unknown. Unknown because clearly these events occurred long before the scientist was even born, and therefore, assumptions must be made to date old samples from an unobserved past. Fossils do not come out of the ground with an age tag telling us how long ago they died.

First radiometric methods were invented by Earnest Rutherford in 1905. Carbon 14 dating specifically was not invented until 1940 by Martin Kamen. Keep in mind that as early as 1779 French scientist Comte de Buffon wrote the book “Epochs of Nature” using the rock layers and fossils as rationalization for long ages. So the idea of an old earth and universe were here long before radiometric dating had “proved” anything.

This illustrates the reality that these radiometric dating methods are wildly biased toward determining the desired “millions of years” result from the beginning. The idea of an ancient earth and universe was based on preexisting presuppositions prior to any radiometric measurement taking place.”

In fact, labs that run radiometric analysis ask the scientist providing the sample to estimate the date range they assume the sample to be. This way the lab can test until they get the result the scientist is “expecting” and throw out any unwanted results.

Radiometric dating can be referred to by different titles. A few of those are: Radiometric Isotope Dating, Carbon Dating, Radio Isotopes, and others. The basics of radiometric dating is this method uses known elements which are unstable (radioactive) but will become stable over time. This process of stabilizing is called radiometric decay.

Samples are processed through equipment called a Spectrometer. This equipment separates and counts each radioactive element in a given sample. From the count a ratio is calculated based on the counted radioactive elements and an assumed initial constant or 100% that was there from the beginning. This is an astronomically important assumption.

Then this ratio is applied to calculate the age of the specimen by placing the number calculated on a chart called a half-life. A half-life is how long is it presumed it took for the radioactive element to have lost half of its radioactive material—thus the decay process is half done. With each passing half-life another 50% decays until no radioactive material remains.

Many materials presumed to be as old (or even older than many dinosaurs) are rich in Carbon 14 thus giving dates of only thousands of years and not millions of years. In fact, diamonds, coal, petroleum, coral, petrified wood, and oceanic fossils such as ammonites all have Carbon 14.