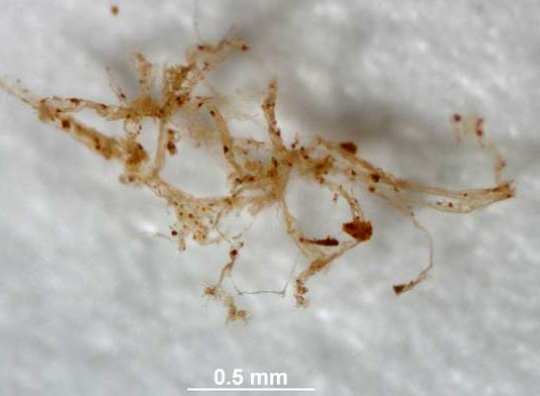 How “soft and flexible” are blood vessels after a thousand years? How about after 10,000 or 100,000 years? The idea that such fossils are exponentially older than even one million years insults both logic and observable scientific decay rates.

Another type of soft dinosaur tissue discovered was translucent flexible branching blood vessels (as in the picture above). Naturalistic time scales were challenged by these fossil samples discovered as being filled with blood vessels.

How could such materials have remained soft and flexible for 68 million years or more? The discovery was contrary to ‘common sense’ and all science ‘knew’ about dinosaur fossils.

Reality found bio-molecules decaying in thousands of years as a maximum. Therefore, initially most colleagues of Mary Schweitzer’s in the paleontology community initially rejected her data and her claim. Many called her discoveries “bio-films”. However, a bit later, they were proved to in fact be blood vessels and not bio-films. Regardless, the shock among those in the paleontological field rang of a form of panic as they searched for explanations for this “shocking” soft tissue discovery.

However, when all data are taken into consideration, the most parsimonious explanation is that these vessels, derived from demineralized dinosaur bone, are endogenous.

In other words, these really are soft flexible blood vessels from a T-Rex dinosaur!