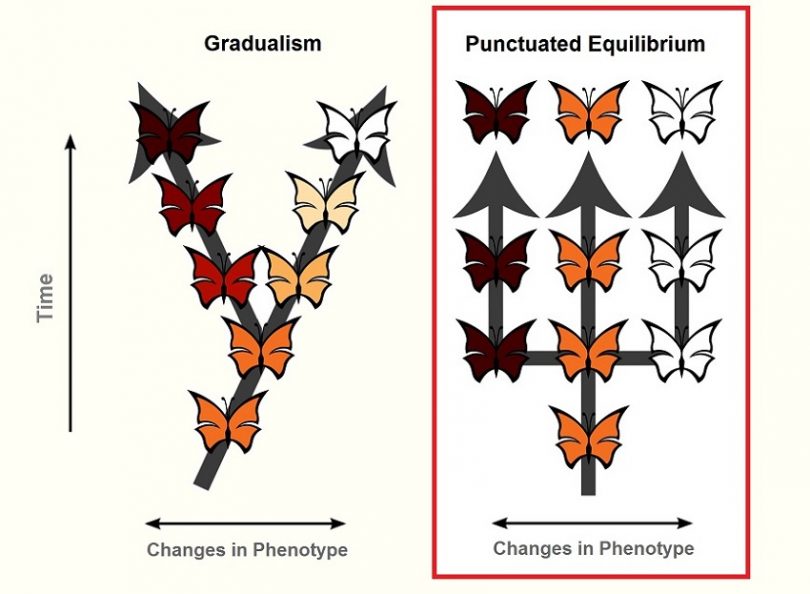 The lack of transitionary forms in the fossil record is a major problem for evolution. Therefore, to save this inconvenient “difficulty” theories such as Punctuated Equilibrium have been proposed as cover. Essentially, stating that there is no evidence because things “must” evolve too fast or “are evolving somewhere else”. Those that claim the fossil record is excellent evidence for evolution are deluding themselves because paleontologists have long recognized this massive evidentiary deficit.

The significance of ‘gaps’ in the fossil record has been a recurrent ‘difficulty,’ used on the one hand to show that spontaneous generation is a ‘fact,’ and on the other hand to illustrate the incompleteness of the fossil record… “

Way back in 1859, Charles Darwin wrote the book “On the origin of species” explaining Natural Selection and the Struggle for Life. Darwin imagined evolution must be occurring at a very slow and gradual rate, one much too slow to be observed in day to day life. He reasoned that if such evolution were indeed occurring then there must be small incremental fossilized species within the fossil record as evidence. Thereby the fossil record would show evidence of evolution as one organism modifies itself (ever so slowly) yet captured in the fossil record to clearly indicate that evolution was making a way toward creating new species. However, in each case the evidence for these intermediate fossils (aka missing links) were no where to be found.

Darwin was shaken and surprised by their absence. Frustrated, Darwin concluded that the fossil record at his fingertips simply lacked the detail to identify the transitional stages that must have existed. The fossil catalog was simply still too sparse and incomplete. Darwin figured it befell future paleontologists to complete the picture of evolution with their new and as of yet still undiscovered fossils.

Unfortunately for Darwin, the centuries dashed these hopes. All the transitional fossils were no where to be found and if anything more stasis had been discovered over the years. Animals thought fossilized and extinct millions of years were discovered as still living today. One such animal is the coelacanths fish was thought as living 400 million years ago and went extinct about 66 million years ago. Then in 1938 off the coast of South Africa it was first discovered that this fish was alive and well until modern day.

Additionally, new vexing issues arose such as those with soft bodied fossils formed from jelly fish. These soft body animals proved yet a new challenge as to how fossils formed. Darwin had theorized that fossils formed slowly through naturalistic processes observed in the present.

Darwin had written, “No organism wholly soft can be preserved.” of course not knowing that some decades later Burgess Shale would produce an extensive array of Cambrian soft-bodied animals including jelly fish discovered by Charles Walcott.

Surely these, and perhaps most of all the fossils had actually formed rapidly. Since Darwin, many fossils have been discovered but the new evidence has done little to nothing to progress the theory of evolution forward. Fossils have been found containing DNA, blood cells, blood vessels, and collagen. Such data argues against slow, gradual processes such as observed in the present. Perhaps the fossils are not ancient but young; Laid down quickly by flood waters. However, we recognize such a position is much too close to biblical accounts to comfort any evolutionist.

Therefore, to rescue evolution from the dilemma of severely lacking evidence, famous paleontologists proposed a theory called “Punctuated Equilibrium” in 1972. It was renowned evolutionary scientists Stephen Jay Gould and Niles Eldredge that offered a new explanation that was different than that Darwin envisioned.

Punctuated Equilibrium was proposed to answer why all the transitionary fossils were missing. “…(because) species remained stable, changing very little for millions of years, then, (Gould and Eldredge proposed) this leisurely pace is “punctuated” by a rapid burst of change that results in a new species which leaves few fossils behind.”

Punctuated Equilibrium conjecture claimed, “Changes leading to a new species don’t usually occur in the mainstream population, rather, speciation was more likely at the edge of a population, where a small group can easily become separated geographically from the main body and undergo changes that can create a survival advantage and thus produce a new, non-interbreeding species.”

Therefore, this conjecture predicts that the fossil record of any single site is very unlikely to record any “process of evolution” (transitionary forms) because “new species” are probably off somewhere else “evolving”. This, of course, at least matches what is observed in the fossil record (most all transitionary forms are missing), so therefore, perhaps they were somewhere else. Unfortunately, even fossils found in other locations have fallen short and continue to fall short of these expectations. Although, it may be argued that some patterns predicted by punctuated equilibrium have been observed in a few cases, the solution remains flat.

The field of paleontology continues to struggle to answer how evolutionary change of species might be observed anywhere in the fossil record.