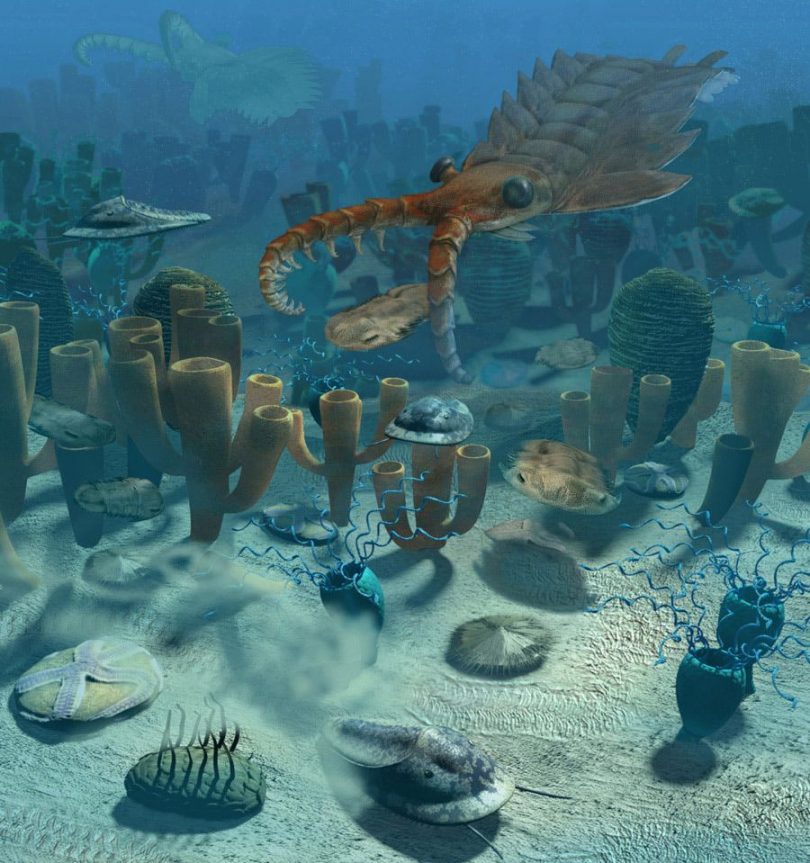 Textbooks focus on ancient landscapes and oceans filled with many extinct animals. The result pulls at the heart stings of imagination and wonder. Yet, evidence in the fossil record is also filled with ordinary animals such as fish, frogs, crocodiles, and turtles. Why are these “ordinary” animals excluded from these drawings of ancient earth? Clearly, by focusing on extinct species, evolutionary popularizers draw conclusions (artistic impressions) which tell the story of transmutation of species.

“Ordinary” fossilized animals are not primarily used as illustrations in textbooks intended to frame the millions of years of evolution that saw transmutated fish become frogs or dinosaurs become modern birds. Textbooks do not find the process of transmutation of species best taught by the many common animals found in the fossil record, despite their abundance.

Evolution describes ancient earth swarming with extinct and mysterious creatures. And indeed, many very amazing animals went extinct. But these illustrations show only these creatures, which appear landscapes and oceans appear alien. They seem to show that early organisms were so different from modern living animals that they were transmutated by blind random chances makes perfect sense. Such artistic drawings of extinct animals adorn evolutionary textbooks; however, “ordinary” animals that lived in the same geologic time periods are deliberately excluded. Why?

The fossil record Is largely filled with billions of ordinary marine animals that remain alive today at the family level. In fact, marine fossils represent 99% of all fossils, and extinct animals represent only a fraction of 1%. Among these fossil layers, paleontologists find ordinary marine organisms, including catfish, sunfish, dolphins, and whales. These fossils are given long technical, scientific names that make them sound complicated, but they are ordinary animals’ remains. Furthermore, the fossil record is full of shells, crabs, shrimps, lobsters, clams, mussels, oysters, and squids. . These animals are physiologically identical to those eaten at seafood restaurants. Many other animals are found among the 1% of rare fossils that Include animals even a six-year-old child could name. Fossils of crocodiles, lizards, snakes, turtles, birds, and frogs. Yet, all these marine and terrestrial animals are conspicuously absent when textbooks discuss evolution as the transmutation of species.

Why are these fossilized animals seemingly ignored by most textbooks describing evolution?

We theorize that this is not accidental. The evolutionary narrative is best taught by focusing on the remarkably few extinct animals, which are best used to explain precursors or transitioned species. Focus is placed on animals like dinosaurs, megalodon sharks, the swimming reptiles plesiosaurs, and of course, the amazing flying reptiles pteranodons.

A typical rendering of the Cretaceous / Jurassic period before the asteroid hit. One wonders, where are the crocodiles, lizards, snakes, turtles, birds, whales, and frogs?

As another example, ice age animals focus on Sabre-toothed Tiger Cats, Giant Sloths, and Woolly Mammoths. Where are the buffaloes, deer, horses, and canines (wolves)?

In conclusion, the narrative of evolution focuses on extinct animals despite the reality that all these animals coexisted with many common animals. Animals that are still alive today also have remained in stasis for millions of years. As an example, bird fossils date back more than 85 million years before many dinosaurs.1 Something you might never find in an evolutionary textbook, ordinary birds such as geese, ducks, and seagulls 1 flew over the heads of dinosaurs.

Can you imagine an evolutionary textbook showing a plesiosaurs and a duck living in the same time era? They did!

Clearly, by focusing on only extinct species, evolutionary popularizers effectively best illustrate the story of transmutation.

Which leads to conclusions such as:

…birds are not only the living descendants of dinosaurs – birds are dinosaurs.”

Such careful crafting of evolutionary conjecture, which centers on extinct species, reveals weaknesses in the foundations of the theory of evolution.  We discovered that the many animals alive today are also observed in fossils. Illustrations of swarming extinct animals are evolutionary icons drawn to paint both a mysterious and alien ancient earth. Perhaps another reason is the evidence of transmutational divergence of life is lacking, and mixing in ordinary living animals only works to unravel the message further. Evolution clearly does not want to illustrate these “problems” of stasis and that most of these fossilized animals (99%) are also alive today.