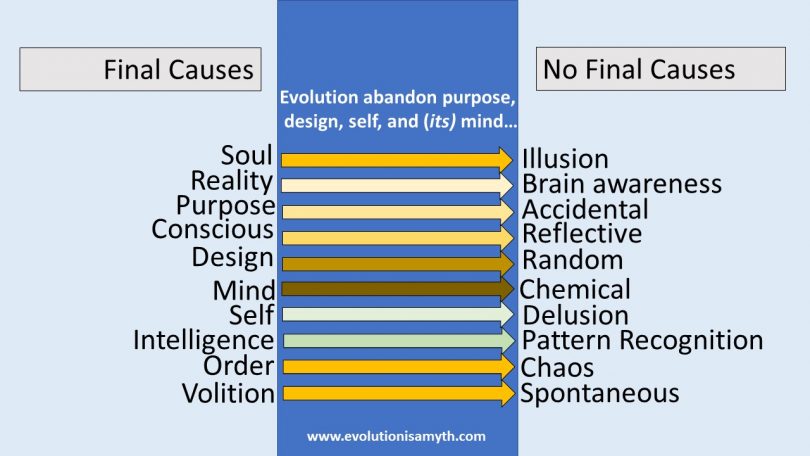 Naturalism (evolution) require no supernatural: no God. Therefore, the universe and everything within it are here due to random spontaneous chance. Such mandates skip logic down a bizarre path where basic tenants of being alive are eliminated including purpose, design, and even your mind are only an illusion.

Richard Dawkins proclaims that despite living things displaying strong “overwhelming” indications of design they are but mere illusions. Dawkins assures us that there is no such thing as purpose, design, or the mind. Oh, and humans are not special either.   As it turns out since this decades old proclamation, the world of genetics today has revealed evidence which implies the ignorance of such proclamations. The assertions fails common sense, but makes sense in light of the belief in naturalism. A universe in which everything emerged by spontaneous and random natural processes over billions of years.

Dave Pollard wrote in his article “A Theory of No-Mind” that amidst other strange logic that a “belief of self was not a sign of intelligence” but rather “is a sign of delusion and disease.”

The concept there is no purpose.

Science, up through Aristotle had found “purposes” for objects but especially for living organisms. It was Francis Bacon a contemporary of Shakespeare, four centuries ago made the crucial decision that science would forever abandon “final causes” or the dreaded “what for” questions. In doing so, science abandon the concept of purpose. Concluding, what we follow to this day, the restriction that science should merely investigate the mechanics of nature and not whether something is good or fit or what its purpose might be. Such questions are beyond scientific inquiry. Really? Why?

This rationale of science without purpose was doomed from the start because some things simply cannot be understood outside their purposes (functions).

For two hundred years the truce between the factions of “final causes” and “purposes” began by Bacon was ultimately laid to rest by Charles Darwin.  Darwin’s solution was to simply deny that purpose even existed.

The concept there is no design.

Darwin’s new theory stood firmly against teleology (creation philosophy) and remarkably and contrary to common sense, insisted on blind and purposeless chance as the champion for the emergence and variation of all life.  By using the term “random” Darwin was using shorthand that proclaimed “unguided, unplanned by any intelligence processes and function- namely no god did it“.

Darwin stated, “there seems to be no more design in the variability of organic beings and in the action of natural selection, then in the course which the wind blows.”

Darwin, Charles “The Origin of Species”

Darwin might have partly came to such thoughts based on loosing his beloved daughter to disease while she was merely a ten year old girl. Perhaps this drove Darwin to believe that “God would not have done it this way…” Darwin perhaps saw nature as cold, pitiless, and heartless.  Richard Dawkins expounded on this mindset over a century later.

The universe that we observe has precisely the properties we should expect if there is, at bottom, no design, no purpose, no evil, no good, nothing but pitiless indifference.”

Richard Dawkins “River out of Eden: A Darwinian View of Life”

“During the minute that it takes me to compose this sentence, thousands of animals are being eaten alive, many others are running for their lives, whimpering with fear, others are slowly being devoured from within by rasping parasites, thousands of all kinds are dying of starvation, thirst, and disease.”

Richard Dawkins “River out of Eden: A Darwinian View of Life”

Dawkins finds that these natural states were only mere electrons and genes firing off and being driven by blind physical forces of nature: some get hurt, some get lucky. There was no rhyme or reason for why or for the existence of justice.

The concept there is no mind.

“But then with me the horrid doubt always arises whether the convictions of man’s mind, which has been developed from the lowers animals; are of any value or at all trustworthy.  Would anyone trust in the convictions of a monkeys mind, if there are any convictions in such a mind?”

Darwin, Charles personal letter after publishing The Origin of Species

Francis Crick the famed scientist that co-discovered the structure of DNA was “expounding on the mind-body “problem”…of the human self. Where is the line between mind and matter?” he asked.

Dr. Crick has been a tireless champion of the brain. In a 1979 editorial in Scientific American, he argued that the time had come for science to take on the previously forbidden subject of consciousness. He wrote as to explain the illusion of the mind: ”You, your joys, your sorrows, your memories, your ambitions, your sense of personal identity and free will, are in fact no more than the behavior of a vast assembly of nerve cells and their associated molecules.”

Crick, Francis “The Astonishing Hypothesis: The Scientific Search for the Soul” 1994

“…biologists must constantly keep in mind that what they see was not designed, but rather evolved.”

Ultimately, as ridiculous as it may sound, the debate between the existence of purpose, design, or the mind boils down to ones belief.

Patricia Churchland “has been formed by evolutionary forces—by Darwinian mechanisms— that built us to merely survive, not to understand or act rationally. Such arguments can be used to justify anything including rape, murder, theft, and all other supposed moralities because morality is an illusion– it does not exist.

Darwin eliminated purpose, Richard Dawkins dealt the final blows to design in biology, Francis Crick eliminated the existence of a mind (or no intelligence only delusion).  As absurd and sad as this may sound, this is where modern day evolutionary science rests.  No design, no purpose, no mind, no intelligence…