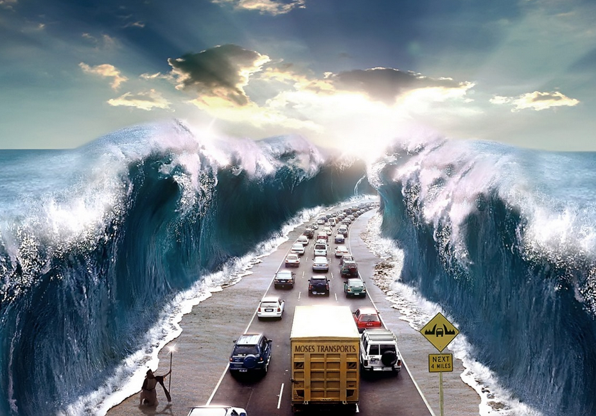 Christians should be frightened to recognize that the church (and not just unbelievers) scoff at the six-day creation, the special creation of Adam, and the flood event of Noah. This is frightening because the bible predicts that these specific areas will be scoffed at in the end days! (2 Peter 3:1-6) Christians must recognize that the bible is based on faith and a belief in miracles of God which are not always measurable naturalistic phenomena. These two are irreconcilable.

Christian’s across the world believe in many realities and events (which we are calling “miracles“) which to the unbeliever appear as ignorant, or idiocy, or even perhaps dangerous. These miracles are invisible, require faith, and are based on biblical scriptures. Additionally, it is important to include that such miracles (realities and events) are also not necessarily occurring in nature and therefore are not always supported by scientific observations such as origins of the universe or creation of life. It is important to note that Naturalistic theories share this same lack of scientific observations for The Big Bang or Abiogenesis. Despite differences within denominations many foundational doctrines of Christianity regarding such miracles are believed by most Christians.

We should not allow ourselves to be “buffet Christians” where we thumb through the bible and pick out miracles we agree with and exclude those we believe disagree with so called “science“. “So called science” because any origins theory regarding the creation of the universe, the earth, or life are all based events that were not observed from the beginning. We can only observe what the results are here in the present. The bible challenges us as Christians to trust and believe in God and all the miracles described in Scriptures, regardless of any modern day opinion of man.

“A miracle is an event not explicable by natural or scientific laws. Such an event may be attributed to a supernatural being.”

Most miracles are believed as recorded in the bible including foundational beliefs:

Most churches either debate or outright doubt biblical accounts of:

SCOFFED: Special Creation of God the earth, universe, and life

First, the book of Genesis describes that God first created light and the earth, then the universe, then plants, then the sun and moon. After this God created all living creatures which all this is defined as occurring during six ordinary days. A young earth and universe can also be confirmed by genealogical accounts within in the bible being summed together as to get an age of about 6,000 years. Creation week is described very specifically occurring within six ordinary days.

The miracle of Creation, although it is like most all other miracles described within the bible which Christians do believe, falls outside modern “scientific” consensus. Because the Big Bang “theory” is indoctrinated throughout society, disbelieving its dogma regarding billions of years of history renders such a Christian believer a fool or being willfully ignorant.

Atheistic sites state it this way: “The difficulties with the (Genesis Creation) story are insurmountable. The evidence from archaeology, paleontology, human history, the fossil record, evolutionary biology, geology and physics all show us very clearly that the Earth, the Solar System and the rest of the Universe was created billions of years ago…”

SCOFFED: Special Creation by God of all living creatures

Secondly, most churches today scoff at the idea of the literal special creation directly by God of both Adam and Eve and all living creatures. Such a creation does not match anything scientific and especially defies Darwinian common ancestry evolution where it is supposed that “simple” life became more complex over generations and eons of time. Here, the “molecules to man” evolution brought fish to frogs, frogs to mammals, mammals to man, etc.

An atheistic site explains the obvious: “…people struggle with the seemingly bad science that is on display in the opening chapters of the first book of the Bible. How can anyone believe that God made the visible universe and all species in six days, that light existed before the sun and moon? How can Christians possibly square the naive cosmology of Genesis with the sophisticated theories (of today)”

SCOFFED: The global flood of Noah

Third, churches scoff at the idea of the global flood of Noah because modern scientific dogma states it as such. Scientific sites attest that large local floods are common throughout the history of the world, that the earth is covered by more than 70% of water, that massive fresh basins not filled by natural processes today filled the great lakes and covered the polar ice caps during the ice age, that fossil layers are sediments laid down by massive flood waters, that many fossils were formed very rapidly, the ocean salinity continues to get saltier, and many other evidences of waters that could equate to a global flood, yet they state certainly there never was global flood: Scoff!

Speaking of witnessing a natural disaster like a tsunami: “If you witness a terrible natural disaster, yes, you want a scientific explanation why this has happened, but you also need something that will help you with your grief, anguish, and rage. And it is here that myth helps us…”

Karen Armstrong, author of “A History of God.

In conclusion, we must not allow ourselves to become (or remain) “buffet believers”. We need to recognize that the origin of life and the universe is not answered by science– it is theorized. We need to learn who we should trust. It is illogical to believe some miracles of the bible but deny or reinterpret others. The bible is either completely true or completely false. Brothers and sisters, we should trust God and doubt man!