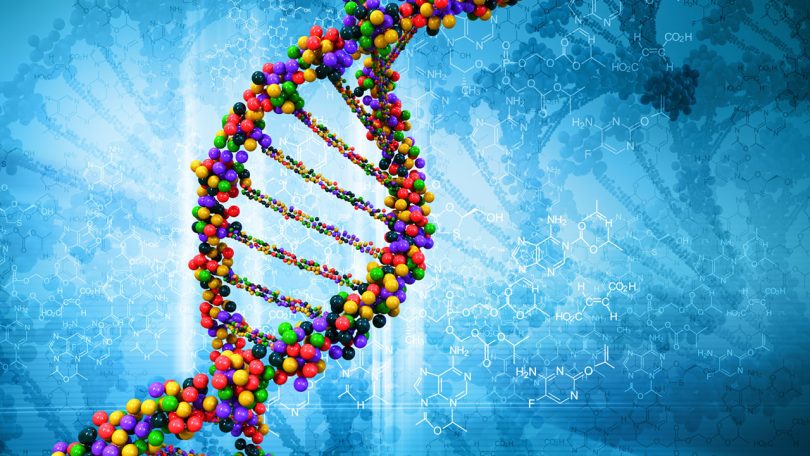 The RNA World Hypothesis, proposed to explain the origin of life envisions non-living chemicals first forming RNA, which spontaneously built replicatable structures that later “learned” to randomly assemble protein chains that “somehow” formed the first living cell. The entire theory based on known chemistry and the central dogma of life is stranger than fiction. RNA’s backbone, like DNA, consists of histone proteins, yet, paradoxically, RNA is thought to have assembled the first proteins from RNA. To add insult to injury, proteins also only function properly under the careful controls of other proteins called enzymes.

“The significance of a DNA is very high. The gene’s sequence is like language that instructs cell to manufacture a particular protein. An intermediate language, encoded in the sequence of RNA, translates a gene’s message into a protein’s amino acid sequence. It is the protein that determines the trait. This is called central dogma of life. “

Therefore, the “puzzle” for naturalism is to figure out how life “must have” spontaneously emerged from such chemicals. This is a radical departure from observable science which dictates the “Central Dogma of life” as how cells form in reality: DNA information is transcribed to RNA, which provides the blueprints to build protein in the living cell.

Another major challenge to the RNA before the living cell conjecture (The RNA Worldview Theory) is: how could the first living cell formed without information to the RNA which we know today comes from DNA. How did RNA spontaneously (accidentally) gain the mechanism necessary to pass along information for the reproduction of future generations?

Today we know that all living organisms must have a means to pass along the blueprints for making proteins, the workhorse for molecules being manufactured into living proteins. Because living cells cannot copy DNA and RNA without the help of proteins themselves– their very structures contain proteins in which they alone manufacture. Scientists have been working on a theory that RNA could self-assemble.

A recent review on the supposed origin of the RNA world (Robertson and Joyce 2012) makes a candid admission:

Today, most origins researchers remain committed to the RNA world hypothesis, but it is safe to say that the honeymoon period has long been over. The idea is riddled with conceptual hurdles and defiance of known chemical laws, and though creationists have taken part in the debate, these hurdles have been largely pointed out by materialists (evolutionists) themselves. The most significant issues fall into two general categories: the prebiotic synthesis of RNA and the self-replication of RNA.

As Leslie Orgel pointed out, “It may be claimed, without too much exaggeration, that the problem of the origin of life is the (same) problem of the origin of the RNA World” (Orgel 2004). Although the RNA world hypothesis serves as an attempted rebuttal to the classic DNA-protein paradox, considering how an RNA world may have originated is paradoxical in and of itself.

The previous discussion has tried mightily to present the most optimistic view possible for the emergence of an RNA replicase ribozyme from a soup of random-sequence polynucleotides. It must be admitted, however, that this model does not appear to be very plausible. The discussion has focused on a straw man: The myth of a small RNA molecule that arises de novo (spontaneously) and can replicate efficiently and with high fidelity under plausible prebiotic conditions. Not only is such a notion unrealistic in light of current understanding of prebiotic chemistry . . . , but it should strain the credulity of even an optimist’s view of RNA’s catalytic potential.

In conclusion, be skeptical of any claim of “life being created in a lab”. We must keep in mind that any self-reproducing or self-assembling chemicals made to replicate in the laboratory are being produced by (1) an intelligent scientist (2) using components found in living cells (such as but not limited to: cell membranes, cytoplasm, lipid cells, ATP, or even “artificial” energy. Such steps are neither spontaneous nor random (experiment is intelligent design) which naturalism mandates. Knowing how chemicals interact and observing this interaction does not equate to the “creation” of anything new. As we know, science cannot even create a single blade of grass. This is more like Dr. Frankenstein then Abiogenesis.

Assembly which transforms into replication of living materials within cells or synthetic cells are not “creation”!