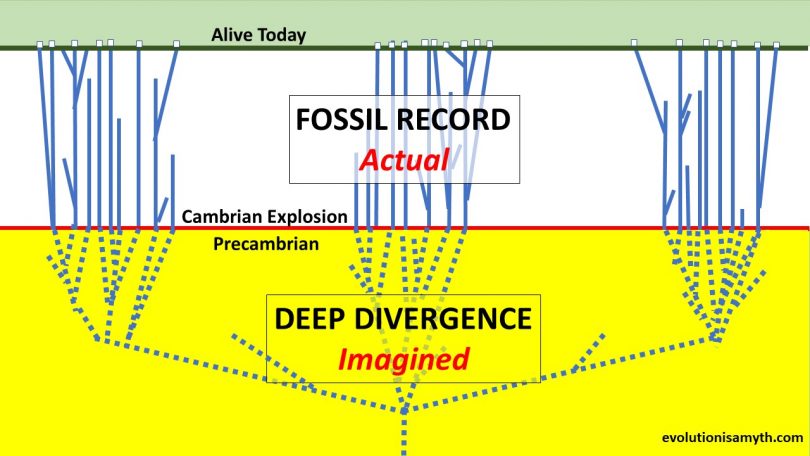 The Cambrian Explosion has confounded experts in paleontology and geology for centuries. How did all these amazingly complex animals seem to suddenly emerge in the fossil record without any precursor forms in the lower Precambrian layers? Many claim that “Deep Divergence” occurred in the lower Precambrian layers that caused the rise of all the organisms revealed in the Cambrian Explosion. While this is logical reasoning for the evolutionary model and the decent of species, it lacks any substantial scientific evidence. The Precambrian fossils are limited to worm trails and microscopic organisms, anything beyond this reality seems to be nothing but wishful thinking.

Some geologists and evolutionary biologists dispute the Cambrian Explosion by claiming that it wasn’t an explosion at all. They reason that life must have emerged over eons of time stretching back into Precambrian layers many billions of years old. Unfortunately, such pronouncements fail to provide geologic or fossil evidence.

Actual Precambrian evidence is limited to perhaps worm trails (likely formed by digging from animals in the Cambrian) and microscopic organisms such as tiny sponges, algae, and cyanobacteria. 1

…the Precambrian…fossil record is poor, with the majority of fossils being stromatolites…(perhaps) some 2.5 billion years ago.”

Despite the missing Precambrian evidence evolutionary popularizers literally draw illustrations (see main illustration) to detail imagined genetic trees on how life must have evolved from these microscopic organisms called a deep divergence perhaps billions of years ago.

Thereby reasoning that animals such as the incredible trilobite did not “suddenly” emergence in the Cambrian but earlier “trilobite-like” forms existed much earlier in the Precambrian. Some species such as the stromatolites began diverging perhaps over a billion years ago.3 Arguing that ancient “novel” life forms like cyanobacteria existed perhaps 3.5 billion years ago.3 From these microscopic creatures all other life forms diverged. Such a theory makes sense within the perimeters of anticipated time lines and mechanisms of evolution, therefore, evidence or not, such deep divergence in the Precambrian must be true.

The only problem with this Deep Divergence theory is the evidence…or more precisely, the absence of fossil evidence.