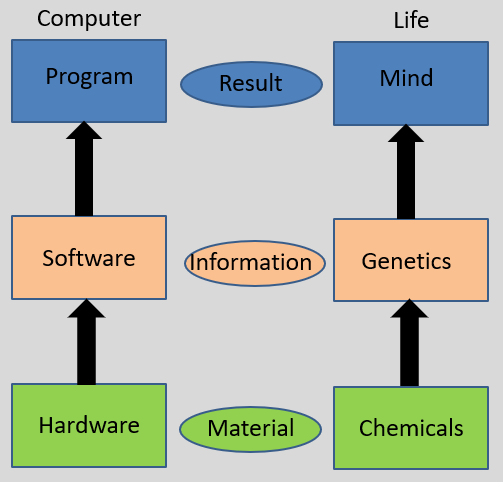 Naturalism postulates that everything that actually exists is constrained purely within physical causes. Everything that exists is due to the result of mere atomic chance and/or law-like necessity such as chemical interactions. However, it can be argued, that the universes most important and highest purposes are outside the material domain and reside in the metaphysical domain. Such entities as information or the mind exist outside any physical domain. Such entities are considered as mere delusion by evolutionists including Richard Dawkins and Francis Crick. Yet, information and the mind seem to be the universes highest purpose but purposes outside the physical make evolutionists very uncomfortable.

Differences between material components (hardware) and specified code information (software) and purpose (results) can be illustrated by using the analogy of a personal computer and a human being.

The personal computer is constructed of physical components including metals, plastics, silica, and other raw materials. These components get power from electricity (hardware). Computers also require specified information written as programming code to cause the hardware to function (software). Together, hardware and software provide a substantially useful tool for word processing, spreadsheets, music, videos, or perhaps surfing the internet (result).

Humans are constructed of oxygen, carbon, hydrogen, nitrogen, calcium, and phosphorus. Plus less than 1% of five trace elements: potassium, sulfur, sodium, chlorine, and magnesium. These components gain their energy to function from genetic software primarily from cellular function of ATP (hardware); Humans also require genetics provided by DNA to gather the specified information required to assemble proteins, manufacture energy, and to reproduce (software); Together, chemicals and genetics provide a substantially useful outcome: consciousness and the mind (result).

Living organisms are not built by the material they are comprised of anymore than the computer can self-assemble from plastics and wires. Just as bricks are used to construct skyscrapers, they do not cause the building to self-assemble. We know that the cause of any construction is never chance but is always intelligence: architects, engineers, contractors, etc. Computer software is written by intelligent engineers who use various computer languages to write machine directions for function into computer code.

None of the physical components reveal purpose. If you open up your computer or smart phone you will find wires, circuits, and switches. But these components do not reveal the purpose of the device. A computer or smartphone can be used for communicating information itself, and like all the cases where information exists it is always outside any material domain. Similarly, the physical anatomy and chemical components of any living organism cannot function without genetic information. Again, information can only be generated by intelligence and always resides outside the material domain and in the metaphysical.

As amazing as the diversity of living organisms are on earth, as stunningly complex DNA genetic information have revealed itself to be, and as wonderful the universe is, the ultimate purpose of being alive is much greater! A purpose outside any material domain. A purpose of self-awareness and a mind.