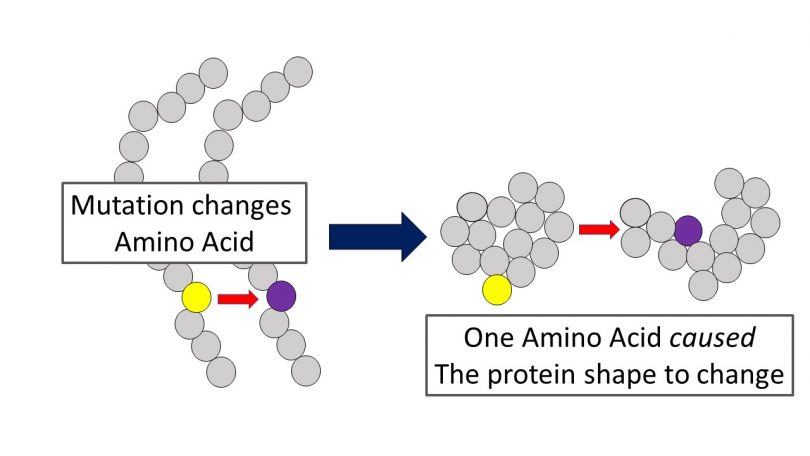 Heredity does NOT operate by copy error mutations to the germline as it functions by allele gene variants as provided by the parents to the offspring. This is where “bait and switch” habitually is used by evolution popularizers, they use the terms heredity and mutation interchangeably despite these terms having opposite meanings: heredity refers to function and mutation refers to copy errors to that function.

Before we get to why mutations are bad, we need to review a few definitions. All living things are composed of Cells, each human has many trillions of cells. Somatic is a term in biology which refers to physiology or specifically that which pertains ultimately to the cells within the physical body. Germline is a term in biology that refers ultimately to the process of how cells progress in a series, specifically here we are referring to the sequences in heredity. Heredity is the passing of traits genetically from one generation to the other or reproduction. Heredity, for our purposes here, is the same thing as natural selection. At conception, germline cells come from the parent sex cells (sperm and ovum) delivering their respective chromosomes to form a unique new offspring. The traits that are passed come from these combined chromosomes (bundles of DNA) from the parents in specialized regions called Alleles.

Alleles are gene variants that provide options for vast variety at conception. The frequency that similar traits emerge, such as brown eyes compared to blue eyes, which are called Allele Frequencies. These frequencies are more commonly known as dominant (brown eyes) or recessive (blue eyes) traits.

Mutations are properly defined as spontaneous copy errors, which occur rarely, but do occur nonetheless. These copy errors change the genetic sequence by substitution, deletion (which causes a frameshift to the sequence), inversion, or insertion (called a point mutation).

This is important: Heredity does NOT operate by copy error mutations to the germline as it functions by allele gene variants as provided by the parents to the offspring. This is where “bait and switch” habitually is used by evolution popularizers, they use the terms heredity and mutation interchangeably despite these terms having opposite meanings: heredity refers to function and mutation refers to copy errors to that function.

Let’s examine the most common definitions (and try to find the root of the modern synthesis):

“…change in the heritable characteristics of biological populations over successive generations.” Heredity.

“…characteristics are the expressions of genes that are passed on from parent to offspring during reproduction.” Heredity.

“…a gradual process of change and development.” Heredity.

“…any net directional change or any cumulative change in the characteristics of organisms or populations over many generations.” Heredity by allele frequencies.

Somatic mutations are all bad

Germline cells, like somatic cells, are affected by mutations. Somatic mutations are all objectively degradative but are germline mutations actually good? Outside a handful of highly dubious supposed “good” mutations: absolutely not.

But what about all the “good” germline mutations?

The naturalist will argue that there are “many” good mutations. These fall into four primary categories: ancient, anecdotal, heredity, or actual lab-verified germline mutations. Ancient claims (based on begging the question) speculate that our genes today “must-have” mutated from thousands or even millions of years ago. A couple of examples of these include lactose tolerance and blue eyes. Seeing no fully sequenced DNA molecule exists from thousands (or millions) of years ago these are only speculations. Other claims are merely anecdotal that have far too little evidence like tetrachromatic vision where one woman out of twenty-four claimed to have this unverifiable superhuman trait. Most others and there are many, are actually provided by allele frequencies within heredity and literally have nothing to do with mutations like elephant ivory tusk production or wisdom teeth in humans. Then there is a handful of actual lab-verified mutations (copy errors to preexisting gene sequences) that can be considered “beneficial”.

These are (likely all) subjective. Let me explain by analogy why. Let’s say there was a mutation that blocked calorie uptake. If you are overweight then this sounds like a beneficial trait, however, if you are impoverished it is deadly. Apply this to the supposed “good cholesterol” mutation that blocks liver function that impacts cholesterol, if you are American you are likely to consider this a beneficial mutation. Now if you are an Eskimo that primarily consumes fish and genetically maintains higher cholesterol levels genetically, you might develop the disease. Often times the subjectively presumed “benefit” is actually a lost function or dysfunction. It is like having your airconditioning in your car fail so you quit using it which confers the benefit of better gas mileage. Did you “gain” better gas mileage? Yes. But did you also lose function? Yes. Because the body is a dynamically complex interdependent system no change happens in a bubble- one change impacts many systems. That is why even the very best medicines also cause side effects. Any mutation to any gene will do the same thing. I have listed all the supposed and subjective “good” mutations here. Anytime someone proclaims a specific good mutation just add the term “side effects” to your Google search.

Perhaps the best example, of a “good” lab-verified germline mutation that conferred a fitness gain is The Sickle Cell mutation.

Any non-silent mutation can cause a devastating misfolding of a protein chain. This “problem” for evolution is called Levinthal’s Paradox. Here, with the Sickel Cell mutation, the proteins folded wrong and deformed the red blood cells into sickle shape (thus the name). This mutation, counterintuitively and serendipitously, provided an inordinately rare “benefit” by causing those affected with the trait to “gain” the ability to survive Malaria. This was a very fortuitous result. Here is proof of beneficial mutations…right? Not exactly.

Because the pathogen (a parasite that eats round blood cells and causes the deadly disease Malaria) could no longer recognize the sickle-shaped red blood cells as food, it died off. This resulted in millions surviving Malaria. However, Sickel Cell is still an endemic (can never be reversed) genetic disorder that causes massive health problems for the carriers and their offspring.

And this is the poster child for “good” germline mutations!

The balance of (all) other lab-verified germline mutations is listed within the tens of thousands of pages of genetic research that documents diseases, cancers, deformities, tumors, illnesses, and more devastation. All these ailments are directly caused by the same germline mutations Neo-Darwinian evolutionists point to for all the goodness and variety in nature. There is a clear disconnect here!

The differences between somatic and germline “mutations” are the most frequently used bait and switch by proponents of evolution using allele function disguised as a mutation.

Genetic researchers have been vigorously and diligently searching for “beneficial” mutations in germlines. The effects of such beneficial mutations must be there somewhere as they are presupposed to explain all the variety and order within life as we observe it today. However, again, without evidence, this logic is merely begging the question. Exactly where is the vast evidence of transmutation and such beneficial mutations? This is indeed a very big question and a very massive “problem” for the theory.

Germline or Somatic mutations are not the heroes, they are the enemy.

When the mountains of data are tabulated, the experimentation is reviewed, and research is completed, ANY mutation (as a copy error) to the germline, is found degradative or at best a subjective “gain”. These mutations have never been shown to build one new gene. Empirically germline mutation can only break fully functional programming code. These mutations are not “evolving” new physiological features (sorry no wings for you!).

Mutations are objectively hazardous killers that break preexisting gene sequences which render dysfunction up to death. These facts are undesirable for naturalists to accept but they are nonetheless undeniable. Together empirical evidence of mutations deals a death blow to the entire theory of universal common ancestry by falsifying its mechanism: mutation.

“Benefical” mutations are exceedingly rare (if they actually exist at all)

Only germline mutations can provide the mechanism for transmutation or universal common ancestry of life. These mutations must render new gene sequences that confer benefit. These copy errors must be passed to offspring and confer “benefit” or a fitness gain to the organism.

Biologist Douglas Axe studied this question directly. He examined the likelihood of random copy errors in preexisting genetic sequences conferring a benefit. In other words, did the supposed mechanism behind universal common ancestry evolution empirically exist?

Axe used a profoundly simple protein (gene) of a modest 150 amino acids in length (average is over 350). He constructed a model that estimated the odds of a single new protein fold being introduced within the known mutation rates as observed empirically in the lab. He reasoned that the simplest known protein fold, as to render a new gene, is called a “hook”. A hook consists of only a two amino acid alterations (in most cases). The results of the study found that the likelihood of such an occurrence ever happening, even once, was vanishingly low.

The problem was mutations are much more likely to destroy a gene than help it. Trying to get two mutations to add a hook proved mathematically absurd.

Axe determined that a random mutation conferring a hook protein fold had a minisule 1 in 1077 chance of occurring even once.1 That is one followed by seventy-seven zeros! This is a nearly incomprehensible and absurd unlikelihood. To put it into perspective, there are an estimated 2.4 x 1082 atoms in the entire universe!2

However, Axe recognized that there were many opportunities or trials for this random event to have happened considering all the vast number of life the earth has had over its (presumed) 4.5 billion year history. There was one new trial at conception (or replication) of each life form that has ever existed on earth (he included both extant and extinct life). Side note: The experiment presumes life already exists with DNA sequences and the pre-existing gene that can be mutated. How this first life form existed is another matter altogether. Anyway, the estimate, (including yeasts, funguses, and bacteria) was a massive 1044.1

Axe divided these 1077 / 1044 (exponents cancel out in division 77 – 44 = 33) and calculated the chance of a simple hook protein fold emerging, on a preexisting gene sequence (on a 150 amino acid chain), throughout all life that ever existed on earth, of happening only ONCE was a remote 1 in 1033.1