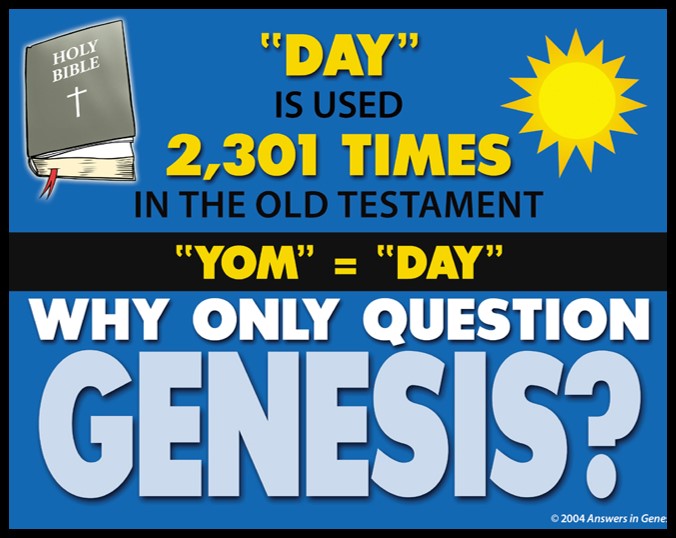 As to shoehorn in billions of years into the Genesis creation account, perhaps well meaning theologians have proposed many interpretations of the word “day”. The word is used over 2,300 times in the Old Testament but only questioned here during creation week?

“The integrity of the Holy Scriptures is at stake. Some people are wanting to reinterpret Scripture in order to conform with modern scientific theories.”

“Before the Enlightenment, most theologians believed the earth was created in the space of a literal week, a notable exception (among others) being Augustine, who interpreted the days of creation figuratively. Most believed that the universe began sometime between approximately 3600 BC and 7000 BC.” (1)

“However, between the seventeenth and nineteenth centuries—with the growing acceptance of geological uniformitarianism and, later, Darwinian evolution—an increasing number of eminent scholars advocated a multi-billion-year-old universe and questioned the validity of the biblical account.” (1)

As to shoehorn in billions of years into the Genesis creation account, perhaps well meaning theologians have proposed many interpretations of the word “day”. Some such interpretations include the Gap Theory, Day Age Theory, or Theistic Evolution which all seek to either transform a literal understanding of day (“yom”) or to transform Genesis creation from history and into allegory. The Day-Age Theory maintains that the term “day” has a broad semantic range which includes vast periods of time, enough to accommodate an indeterminate number of years. Over the past two centuries, the issue of the meaning of yom in relation to the age of the universe continues to “be vigorously debated by many scholars”. (1)

If we consider various statements such as, “in my grandfathers day” it is clear that the context is not a literal 24 hour day but refers to an earlier era perhaps decades or even maybe a century ago. Or, “do you offer any day tours?” means during daylight hours of an ordinary day. Or, “it was on my wedding day” is a personal date when the wedding took place. “In the days of the steam engine” describes a past era before the combustion engine.

However, if a number is added before the word day then the duration of literal 24-hour periods are always specific. Such as “in four days we will be home from our vacation“. Also, if a descriptor such as sunrise or sunset is used it is also always specific to a literal 24-hour duration. Such as: “we woke up at the break of the day” or “the day ended for us right after the sunset“.

Such variations and constraints regarding the use of the word day also apply within the biblical text, so how can we know that the creation in Genesis intends to communicate an ordinary seven day period?

To determine the intention of the creation week intending to be understood as a literal seven days each consisting of 24-hour periods is clarified by being both enumerated and called “an evening and morning”. The bible calls each creation duration a day by number. The scriptures conclude each creation period as “the first day”. This enumeration continues for each of the seven days numbering the “second”, “third”, “fourth”, “fifth”, “sixth”, and “seventh” days.

In Jewish tradition the day ended and the new day began at sunset in the evening. If numbering each day of creation remains not clear enough, the bible also describes the conclusion of each period as “an evening and the morning”.

Together each creation period is numbered (first-seventh) and clarified as “an evening and the morning” for each of the seven days of creation.

“So the evening and the morning were the first day”.

As an additional point of confirmation as to the intention that Creation occurred in literal 24-hour periods is the fourth commandment written by the finger of God:

“Remember the Sabbath day, to keep it holy. Six days you shall labor and do all your work…For in six days* the Lord made the heavens and the earth, the sea, and all that is in them, and rested the seventh day.”

Exodus 20:8-11 describes the Sabbath and an example God used to show us how we should conduct ourselves. We should work six days and rest on the seventh day just as God also did during Creation week. Of course God created the universe in six days not because it extended His limits, God created time itself, creation was done as such not for God but for us!

The intention of the scriptures declare that the days of creation were literal 24-hour periods is absolutely undeniable.