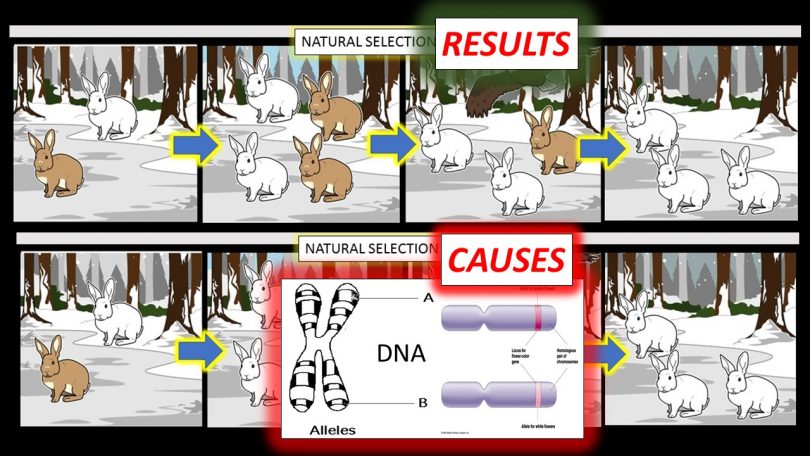 Mutations do not drive diversity of species as imagined by Neo-Darwinian evolution. Diversity is limited to the same species and variety is driven by DNA allele function at reproduction.

Two pillars of Neo-Darwinian mechanisms which “drive” evolution are (1) genetic “variation” due to “Random Mutations” (errors) caused during replication of DNA which (2) become “locked in” genetically at reproduction, also called “Natural Selection”. Together these two mechanisms (random mutation and natural selection) are thought to provide the mechanisms which drive small and ultimately large scale changes in all species including how large-scale transformations such as fish become frogs. But do genetics support this claim?

We must clarify two enormously opposite types of “mutations” used in biology terminology. We will call the two types “metabolic mutations” and “germ line (mutations) function“. In the first type of metabolic mutations we find ourselves inflicted with millions of such mutations–millions of literal genetic informational errors— each and every hour of each day.2 Considering that the human genome has over 3 billion genetic letters in its informational code, only 10 new mutations occur with each DNA replication in our bodies.2 Considering the millions of potential errors per hour, this accumulation is very low because most errors are corrected by our DNA 2 which uses complex editing, splicing, and self-correction software to vastly limit such errors.

Every time human DNA is passed from one generation to the next it accumulates 100–200 new mutations, according to a DNA-sequencing analysis of the Y chromosome.”1

Additionally, it is well understood that metabolic mutations increase under environmental hazards such as excessive sunlight, obesity, smoking, exposure to other known carcinogens, or pollution.3 Despite this seeming grim reality, we fortunately experience few metabolic mutations which ever accumulate into sex cells. Sex cells would be the only place where mutational errors could pass to future generations (i.e. “evolution”) is here in the second type of mutation called “germ line”.

We argue that germ line function of DNA should not be categorized as a “mutation” because this function is not driven by errors like mutations in metabolic mutations. Genetics has clearly revealed that specialized regions of DNA (called Alleles) permit, encourage, and even limit genetic variability of offspring at germ line function. Such function causes the variability of offspring we see. Such variability as characteristics like hair, eye, or skin color. Such visible characteristics driven by heredity prompted Darwin to theorize the Origin of Species in the first place, not the destructive results of metabolic mutations.

Genetic research as dismantled the Neo-Darwinian genetic “tree of life”. Darwin based the construction of the tree based on large scale physical appearances of animals– completely unaware of DNA genetic information. (Clearly, this field of genetics did not yet exist in 1859 when Darwin wrote his famed book).  Today, genetic research proves heredity is not based on mutational errors as expected by Neo-Darwinian Evolution, but rather, changes within the same species are driven by modifications allowed by DNA information by genetic regions called alleles.

Germ line function is purposeful and might be considered the opposite of metabolic mutations which are caused by genetic copying errors.

In conclusion, we have found that there are two distinct types of mutations. The first type we dubbed as “metabolic” mutations which are truly genetic mistakes or errors. These mutations cause degenerative, harmful, and even deadly consequences for living organisms.  They certainly are never beneficial to life.

Unfortunately, some of these metabolic mutations accumulate and are passed to future generations in germ line function at reproduction. However, clearly these mutations have never been observed to make such large scale modifications as imagined by Darwin to cause a fish to “gain legs” and become a tetrapod (frog). Such ideas are storybook nonsense fit for fairy tales. These errors accumulate (genetic entropy) and cause all living things to be actively deteriorating–not getting better like evolution imagines.

DNA is making copies of copies of copies; Each generation (genetically) is getting worse– not bigger, better, or stronger as imagined by Darwin. Genetics has revealed that amazing DNA complexity intends allele function to cause an ever expanding and blossoming variation in all living things. This DNA allele mechanism enables both the survival and breathtaking beauty in all living things. Ultimately, providing abundance and diversity of life just as God intended.

1 “Your Body Acquires Trillions of New Mutations Every Day- And it’s somehow fine?” Sarah Zhang, May, 2018 The Atlantic; https://www.theatlantic.com/science/archive/2018/05/your-body-acquires-trillions-of-new-mutations-every-day/559472/