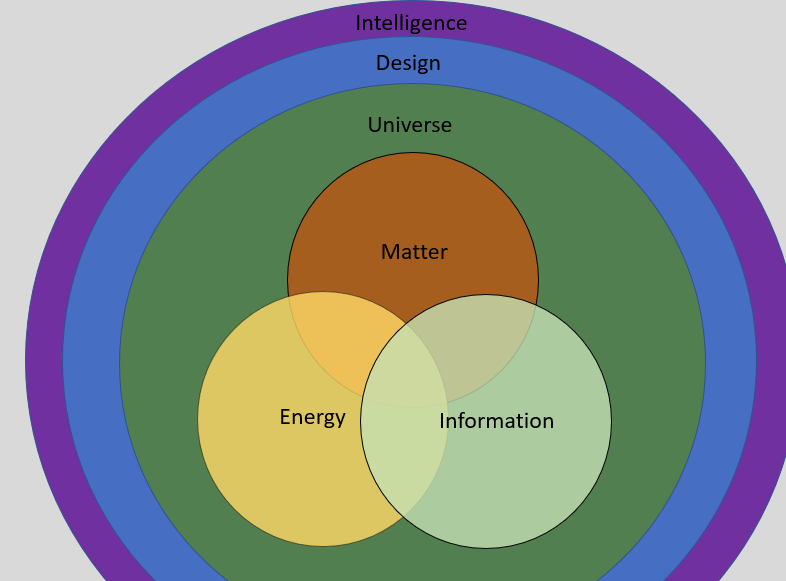 Evolution’s naturalistic pursuit to explain the universe and everything in it as emerging through mere matter and energy have failed. The presence of genetic information in all living organisms provides evidence of intelligent design. The presence of biological information in DNA, RNA, and proteins are perhaps the greatest threat to naturalism because the theory collapses when the only tools it can call on are matter and energy as an account for the emergence of genetic information.

Naturalistic evolution ultimately defines the universe as having emerged from purely materialistic processes composed by chance and/or law-like necessity.  Naturalism presumes everything emerged, including life itself, as a result of law-like processes of chemicals composed of mere matter and energy.  However, since 1953 when Watson and Crick determined the double helix shape of DNA, a third and equally powerful fundamental entity emerged which continues to defy naturalistic explanations.  That third fundamental entity is information.

Today, biologists routinely refer to the informational content, expression, and storage of information in DNA, RNA, and proteins.  Scientists recognize that at some point in the history of life on earth, the emergence of biological information must be explained.  How such complex and specified information first arose remains ground zero for all origin of life theorists.  Clearly, any theory proposed must include how such information came about.  While this puzzle has persisted for decades, purely materialistic processes of mere matter and energy continue to prove vastly inadequate in answering where information originated.

Information can be explained as specified arrangement of the parts used to provide communication or meaning or a reduction of uncertainty 1.  Such examples of information include language, computer coding, mathematics, hieroglyphics, and genetics.  There is only one manner in which such information has ever been observed and that is by intelligence.  We have never observed specified information as emerging from any other source other than intelligence. Natural process of matter and energy nor by any law-like properties have never been observed to produce information beyond simple repetition such as crystal or snowflake formation.  Our design intuition confirms our common sense that information only emerges from a purposeful intelligent mind.

Any origin of life theory which presupposes either the non-existence or illusionary existence of information or that information can emerge spontaneously through natural processes are oxymoronic and paradoxical.

Many origin of life proposals have attempted to answer the dilemma of information, when the theories are carefully examined, it becomes clear that the “problem” of information is never answered but is displaced to earlier or assumed as preexisting or perhaps overlooked as if it is irrelevant. Whether the proposals are protein first, amino acid first, or RNA first, they all fail to account for the very information required for the function of the cell from the very beginning.

More related blogs: INFORMATION AND PURPOSE ARE METAPHYSICAL, FRANCIS CRICK DETERMINES: NO SUCH THING AS THE MIND, EVOLUTION MANDATES NO PURPOSE, DESIGN, OR MIND