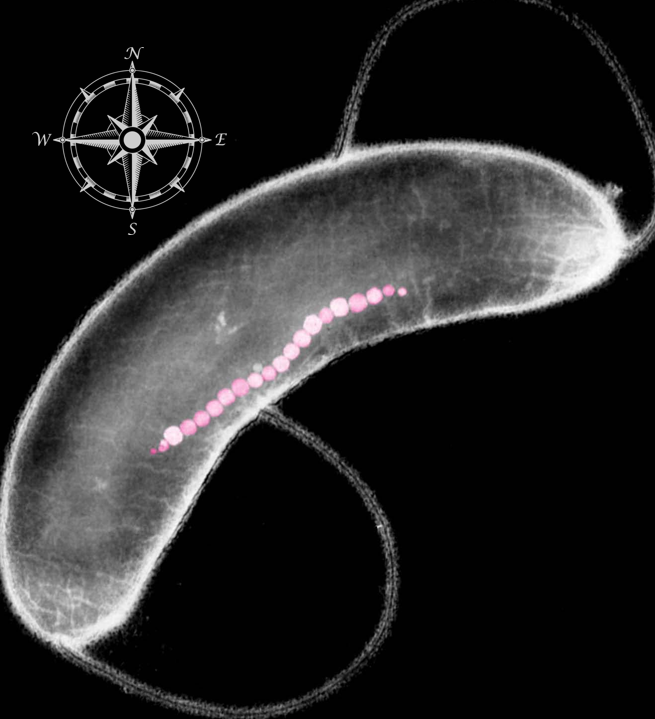 The earth’s magnetic field is not just used by birds, whales, and other higher animals for navigation– it has been found to be used by natures simplest organisms such as bacteria. This challenges evolution because the idea of single celled organisms gaining complexity and function over eons of time leaves the question standing: how did such simple forms learn to build such complex internal compasses?

It has been known for sometime that migratory birds have a highly specialized ability to sense the magnetic field of the earth and use it to navigate great distances.  How did birds gain such talents? The answer “instinct” rings hallow, explaining perhaps the observed end result but failing to answer how or when the the abilities emerged.

Well, the “problem” got exponentially worse, recently it was discovered that even the “lowly” bacteria has such sophistication!  Richard Blake discovered magnetotatic bacteria which is now recognized as quite common.1 The bacteria has been determined to use a mineral called magnetite which works inside the cells to line up polarized minerals the cell uses to orient the bacteria.1

These magnetite minerals are not simply laying around to be ingested and retained by the organism, no, they are synthesized by the cell to the precise size, shape, and kind of material to build an internal compass.

The cell has a handy storage container (a membranous compartment) called a magnetosome which works to attach the minerals to the right places within the cell.1 How it all occurs is by a manufacturing process similar to a nano-sized factory complete with quality controls and delivery trucks. Within the cell, the iron mineral is toxic so the handling of this hazardous material takes place in specialized compartments divided from the rest of the cell as to keep the cell safe. Protein pumps work to remove the hazardous materials (iron) brought about by the manufacturing of the mineral, by pushing out the waste through specialized machinery, pumps, and portals. After synthesizing the mineral, other molecular machinery folds the minerals into the correct shape and wraps them in a cellular “kitchen plastic wrap”.1 Then, other cellular machines deliver the wrapped minerals to a storage location where the magnetic crystals are allowed to grow to the right size. The function of this compartment also ensures that the crystals are neither too small or allowed to grow too large before being shipping out for use by the cell.  After the crystals are the right size, similar in shape to molecular dice shaped cubes, other cellular machines affix the magnets to the cells skeleton.1   Resulting in a fully functioning internal compass for navigation of the “lowly” bacteria.

Does this strike you as a product of random spontaneous step-by-step evolution? Such processes, especially those dealing with the internal synthesizing of hazardous materials, are irreducibly complex meaning all the steps must be working from the start. This causes Darwinian evolution to breakdown.