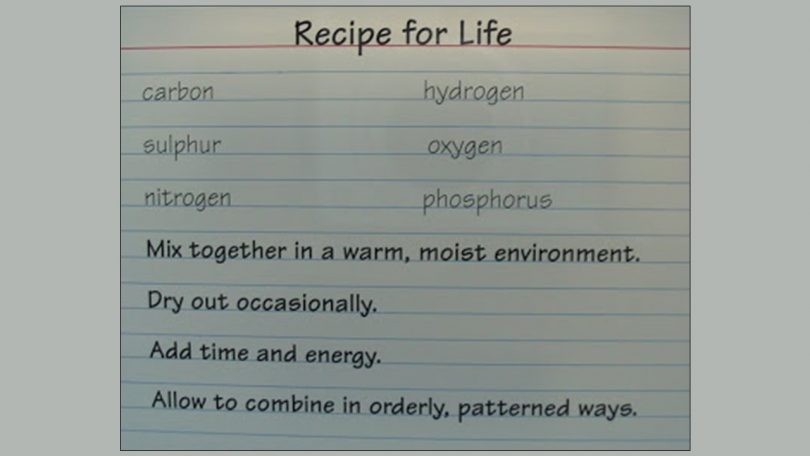 The Theory of Evolution assures that the “recipe for life” (as boldly display at the Denver Museum of Nature and Science) began spontaneously by chemicals randomly interacting over vast periods of time. From a distance and with an imagination, such an event might seem plausible. However, as chemists and origin of life theorists well know, attempting to reconstruct even the simplest possible organism proves to be a massively complex task. The first puzzle emerges as a dizzying array of complex specified code-like information within DNA, with no real explanation as to how or where it emerged. Then, scientists today recognize that the supposed “simple” cell mandates devastating complexity in the form of protein machinery. Beginning with a specialized cellular membrane, unique amino acids, polymerases, transfer RNA, ribosomal RNA, synthetases, ATP for energy, sugars, vitamins, minerals, phosphates, and ribosomal proteins.

The simplest known extant (living) single cell organism Mycoplasma genitalium is a tiny bacterium that inhabits the urinary tract system and is associated with gonorrhea and chlamydia in humans. This tiny bacterium is comprised of DNA with 562,000 base pairs (compared to human DNA at a staggering 3.2 billion) which are used as informational blueprints used to assemble 482 genes (proteins). Scientists have reasoned they might be able to “simplify” an imaginary organism even further by perhaps “knocking out” certain genes (of the 482) down to a mere 250-400 genes.1

One must not gloss over the reality that extant cells require information as provided by DNA to be alive. The emergence of information is a massive problem for naturalism and this “problem” stands on its own and apart from our illustration here. For our purposes we begin with an imaginary scenario where information preexists– how we exclude from this examination.

Now, lets sum together the “parts” of the “simplest” organism:

LARGE MOLECULES: DNA (genetic information), PROTEINS, NUCLEIC ACIDS, POLYMERASES. To express and process the information for even a simplified bacterial translation system, DNA requires 100+ specific proteins for this function. Another 20+ proteins are needed for transcription and another 30+ proteins for DNA replication. Scientists have reasoned that even the “simplest” cell would require at least 250 proteins overall.2 (Paradoxically, DNA is composed of the very proteins it synthesizes).

ENERGY: ATP. In addition to the large molecules above, our “simple” cell needs energy. In extant cells the primary supply of energy is provided by ATP. ATP works similar to a rechargeable battery. ATP produces high-energy which enables protein synthesis and really nearly everything that functions within the cell. Our “simple” cell depends upon a preexisting and renewable supply of ATP.3 (Paradoxically, ATP is comprised of proteins only synthesized by preexisting ATP).

ENVELOPE: CELLULAR MEMBRANE. The first cell would have required a semipermeable membrane to both protect itself from dangers outside the cell such as solar radiation, oxidation, and even water (acidic) while also providing a safe cradle where good chemical reactions could safely occur. In extant cells, this structure is composed of lipid molecules that closely align together (link together) as a wall which are built by proteins within the living cell– how they would have first formed randomly is another problem altogether.3 (Paradoxically, lipid membranes used in extant cells are built by DNA information provided within the living cell).

SMALL MOLECULES: PHOSPHATES, LIPIDS, SUGARS, VITAMINS, MINERALS. Imagining a near miraculous primordial soup that has all the needed materials for a cell to function is mind blowing. Many amino acids used for protein chains have half lives in water of mere hours. Extant cells require many small molecules are required including phosphates, lipids, sugars, vitamins, and metals to synthesize and metabolize function.3 Of course these are all co-dependent on proteins, nucleic acids, DNA, and ATP. (Paradoxically, all amino acids and many vitamins, sugars, and lipids are built by DNA information provided within the living cell).

Clearly, building a living (extant) cell requires a dizzying array of complex material components in addition to the mystery of informational DNA. Cells are comprised of cellular lipid walls, unique amino acids, polymerases, transfer RNA, ribosomal RNA, synthetases, ATP energy, sugars, vitamins, minerals, phosphates, and ribosomal proteins.3 Even if you placed all the “ingredients” together in a lab, life does not self-assemble.

The reality is the function of life, really the mechanism of life, is orchestrated with amazing precision, driven by the specified information of DNA. Really, common sense is all one needs to apply to clearly see that life mandates design, intelligence, and purpose.

Evolution asks us to suspend such common sense and design intuition and believe that chance and/or chemical necessity was all that was needed to burp up the first living cell. The absurdity of biochemical evolutionary claims are seemingly boundless.