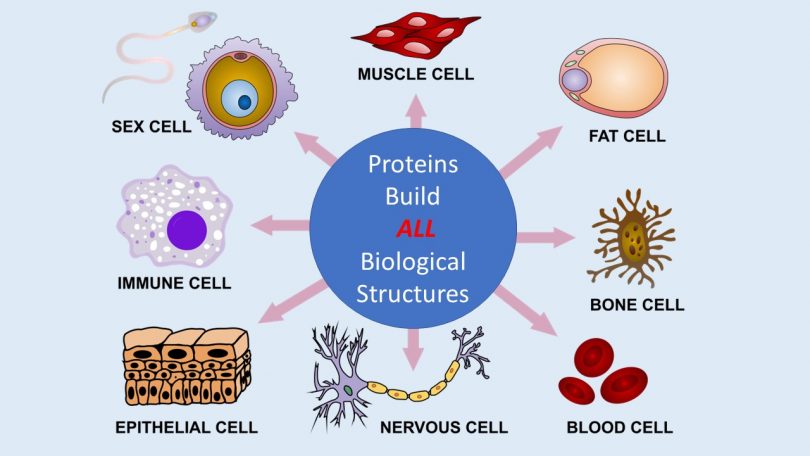 Proteins depend on activation by another protein which is a paradox for protein formation. How could have the first protein activated without the preexistence of the other protein? Such a system is irreducible and hallmarks of design and not explainable by Darwinian evolution and random spontaneous chance.

If you are like most people, when you hear the word protein you think of something we eat such as steak, chicken, or perhaps a diet soy protein shake.  Proteins are literal flesh written under code like instructions of a computer program to write three dimensional living molecular structures. An analogy could be a 3-D printer which receives instructions from a computer to print a replica of pretty much anything.

The structure of proteins have been understood by science since about the mid 1970’s.1 Over the decades our understanding of these structures, how they form, and how they are formed has grown exponentially.  It is well known that proteins play both a dynamic and vital role in all living organisms almost always working in tandem– interacting together like team members.

Within the cell, mechanisms function as nano-scale factories which literally print living flesh.

“Proteins are the machines within living tissue that build the structures and carry out the chemical reactions necessary for life.”1

Proteins are comprised of amino acids which are chemically hooked together into chains (more on amino acids here).  All living things use the same 20 amino acids which used as chemical “letters”.  Each amino acid of this chemical alphabet is then used to form sentences.  Such sentences emerge as flesh or proteins which are used for various specific functions within the living cell from skin to blood.  It is the job of the protein to catalyze a chemical reaction while an enzyme matches the shape of the protein to the target.

Further research has revealed that proteins generally work in teams creating a cooperative requirement—each dependent on the other protein to complete its intended task in the cell.1

“In general, the cell’s work requires teams of proteins; each member of the team carries out just one part of a larger task.” 2

Therefore an additional protein paradox emerges: “If each protein depended on activation by another (protein), how could the system have ever arisen?”2

Most all proteins work in teams to complete tasks. Symbiotic relationships in nature such as the humble bee and flower pollination, and there are perhaps thousands if not millions of other such examples. However, such relationships play havoc for Darwinian evolution.

While many components, perhaps even all components of Darwinian evolution have areas where elements are true, however, the theory utterly fails as explanation for cooperative processes where each function is dependent on the other or function breaks down. Such a systems are considered to be irreducibly complex systems.

“A single system composed of several well-matched, interacting parts that contribute to the basic function, wherein the removal of any one of the parts causes the system to effectively cease functioning.”

Therefore, an irreducibly complex system cannot be produced directly, that is, by continuously improving the initial function…by slight, successive modifications of a precursor system, because missing such a part by definition (renders such a system) non-functional.

Since natural selection can only choose systems that are already working, then if a biological system cannot be produced gradually” then Darwinian evolution fails.

Such irreducible complex (integrated and cooperative functions) within the living cell must have emerged as an integrated unit all at once. The system must be fully functional from the beginning or it does not function and natural selection by definition would remove the components before they could sequentially develop.

Evolution imagines the vast diversity of life on earth being formed through common ancestry of all living things, through gradual, step by step, processes over billions of years. Natural selection over eons of time was proposed as “daily and hourly scrutinizing” and “adding up that which is good” while “rejecting that which is bad.” 3

Activation of one protein by another protein as to ensure proper and intended function is an irreducibly complex system because both rely on the other to be fully functional from the beginning. The question for evolution here is: how could Darwinian evolution explain such multi-step functions through gradual, step by step processes if one proteins purpose is to activate another?

To complicate the matter, scientific discovery has revealed that “as the complexity of interacting (components of a) system increases…the likelihood of an (evolutionary) indirect route drops precipitously.” 2

“Worthy are you, our Lord and God, to receive glory and honor and power, for you created all things, and by your will they existed and were created.”