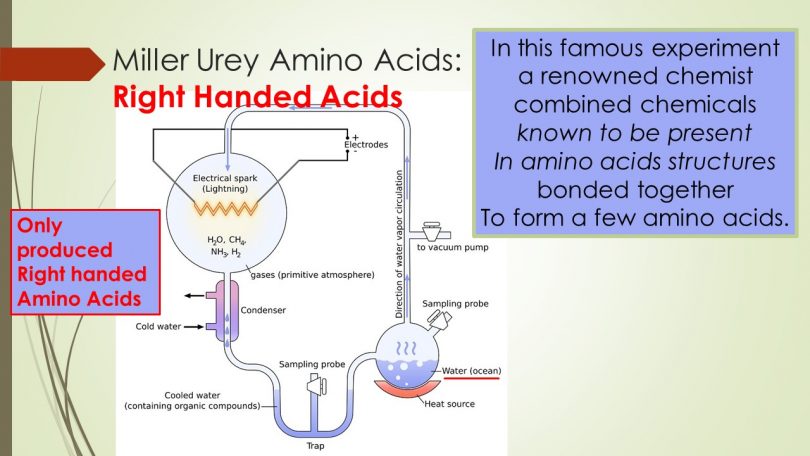 Chirality is best described by using the analogy of gloves: a right-handed glove and a left-handed glove are mirror images of each other. Proteins in living things are constructed by the living cell by using only left-handed shaped amino acids. The Miller-Urey experiment produced only a few right-handed amino acids and none were remotely similar to those used by living organisms.

The Miller Urey experiment is reported as having produced (“reported” because it has never been replicated) right handed amino acid chemical structures (amino acids are not alive) but no left handed structures. Therefore, the amino acids manufactured within the experiment were unusable for protein formation in Life.1

The Miller Urey experiment failed to reproduce any amino acid structure used by any living organism.

The Miller Urey experiment may have produced a few unusable amino acid right handed structures (double carbon bonded chemical structure). It should be noted that other problems within the experiment included the oxygen paradox, water paradox, amino acids used by life only manufactured by other living things, no meteor amino acids used in life, and the process included intelligent design by scientists and not random processes filled with paradoxes.