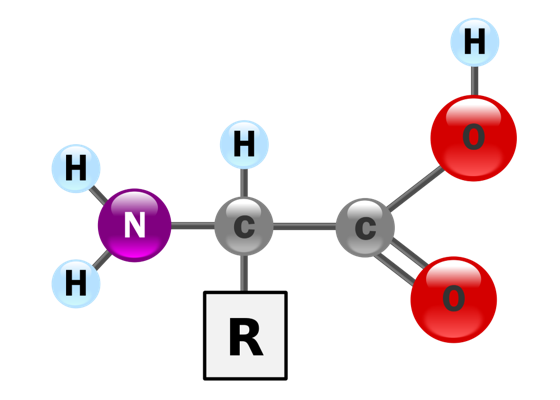 Amino Acids are double carbon molecules that are assembled by chemical formations in nature but by highly complex cascades in the living cell. The amino acids used in life are carefully and specially synthesized within and by the living cell. While nature renders some odd-ball amino acids from naturalistic processes like meteor’s, none have ever been discovered to resemble those used by life. While amino acids are called the “building blocks of life” they are not alive until after being assembled into protein chains and activated by enzymes within the living cell.

Even though amino acids are famously referred to as “the building blocks of life” because living things (through the information contained within their DNA) transform amino acids (chemical structures) into proteins.  Proteins have never been observed as being formed by any method other than DNA despite such icons of evolution as The Miller Urey Experiment.

Amino Acids are non-living double carbon molecules and can be assembled via chemical formations.  There are 20 amino acids used by life, only manufactured by life, with left handed chirality .1 This may render some amino acids from naturalistic processes, not similar to anything discovered on meteors, and they do not come close to amino acids used by all living things on earth.

…it is unclear if the amino acid chemicals identified on meteors actually formed in space, in transit through our atmosphere, or while cooling on the earth’s surface.2

Regardless of the seeming strength of the conjecture, elements which compose amino acids (carbon, hydrogen, oxygen, and nitrogen are abundant on earth) and therefore generically amino acids (especially right handed) are abundant and can formed easily under laboratory conditions. As an example, amino acid supplements for humans (and animals) are manufactured in the lab similar to how pharmaceutical drugs are created. However, the amino acids used by living organisms, manufactured only within living organisms, have NEVER been found in nature, through experimentation, or on any meteor.

The idea of amino acids arriving on earth by meteors sounds mysterious and enticing, however, such a claim is a massive reach because it assumes random amino acid structures were used by life– which has never been observed.

We have found common denominators observed in biology within all living things: All life contains DNA, all life uses the same 20 left-handed amino acids, all life is comprised of cells with highly specialized enzymes, membranes, and structures. Natural processes for amino acid formation from experiments, nature, or meteors are at best highly imaginative and at worst outright frauds.