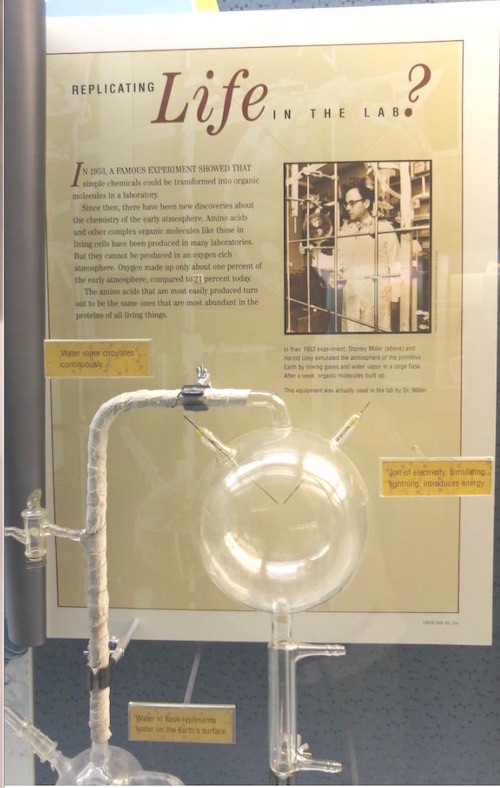 The pictured Miller Urey Experiment displayed at the Denver Museum of Science and Nature as “Replicating life in a Laboratory” is flatly deceptive both in intent and construction. Yet it is repeated everywhere because “it tells a good naturalistic story”.

At a casual glance, of the image of Miller Urey Experiment “Replicating life in a Laboratory” feeds (a false) narrative of evolution and the spontaneous emergence of life.

Honest and educated scientists, professors, individuals, and teachers of chemistry or biology bite their tongues when viewing such deceptive displays. Such displays are found everywhere and are considered an icon of evolution. They are displayed at museums, universities, television, textbooks, and the internet.

Educated individuals know that the entire display, intended and constructed as to communicate “life can be manufactured in a laboratory” is at best deceptive and at worst a fraud.

The Miller Urey experiment actually is more accurately proof that life cannot emerge from a laboratory. Problems discovered by the Miller Urey Experiment include but are not limited to chirality problem, an oxygen paradox, water paradox, amino acids used by life only manufactured by other living things, no meteor amino acids used in life, and the process included intelligent design by scientists and not random processes filled with paradoxes.

Images of The Miller Urey experiment adorn museum displays, universities labs, textbooks, educational television programs, and the internet, deceptively leaving the uneducated observer that life can be created in a laboratory.

Any honest scientist or educated individual on the matter, understanding the very basics of chemistry, concedes that The Miller Urey Experiment resulted in nothing close to “replicating life”. The experiment perhaps manufactured a few misaligned amino acids (double bonded carbon chemicals) which were never and are not alive.

Nonetheless, regardless of all the paradoxes known for the supposed spontaneous emergence of life, the steady drum beat marches the parade of evolution forward. All “true believers” of naturalism will continue to “look the other way” in light of such deceptions, perhaps, ironically, because only such ruses and dishonest presentations can adequately “teach” the dogma of evolution so very well indeed.