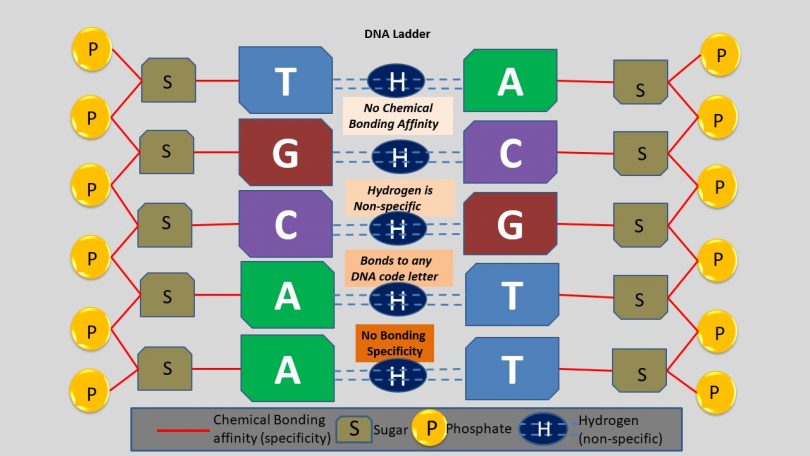 Chemical interactions have been shown to generate repetitive structures such as observed in crystals, snowflakes, or even as discovered in the backbone of the DNA molecule. Of all known chemical bonds, only the molecular bond of hydrogen (called a weak electrical attraction) are able to mediate specified genetic information inside the DNA molecule. Research has shown that the specified complex sequences such as found within informational DNA (base pair sequencing G,T,C,A) remains an illusive mystery for any origin of life theorist. Biochemists seeking to answer how chemical evolution may have caused the random emergence of life must answer the riddle of the emergence of information from mere natural processes.

“…there are no chemical bonds between the bases along the longitudinal axis in the center of the helix.  Yet this is precisely along this axis of the DNA molecule that the genetic information is stored.”1

Chemical evolution is thought to explain how the emergence of the first life first emerged on “primitive” earth.  Proponents explain that similar to the way gravity effects the orbit of planets, so do chemical law-like principles affect the bonding of chemicals that ultimately caused life to arise.  Exactly how this might have happened remains elusive and with each new year of insight into the inter-workings of genetics the answer gets more difficult to answer. However, origin of life theorists, evolutionists, and biochemists all remain convinced that chemical abiogenesis remains as the only possible explanation.

Massively oversimplified textbooks, museum displays, and university professors proclaim (either ignorantly or falsely) that the “recipe” for life can be simply explained. They begin in the “kitchen” of early earth filled with unique combinations of chemicals in the atmosphere and in a pool of chemicals where the mixture is baked for eons and eons of time. Really, time is the most important ingredient. Over billions of years, lightening energy bakes the mixture as it churns in a prebiotic pot of warm water brimming with all the amino acids and chemicals required for life. Chemicals such as hydrogen, water, nitrogen, carbon monoxide, carbon dioxide, methane, and others (recipes and cooking techniques differ).

While the various origin of life theories differ on specifics, whether deep sea vents, bubbles, ice crystals, or primordial soup, each can be split into one of two camps. They either fall into a “protein first” or a “RNA first” argument. Few theorists have dared to venture a “DNA first” or “information first” explanation (with the exception of Intelligent Design advocates) despite the clear evidence from extant cells that this is how all life operates.

Ultimately, the challenge for any origin of life theory resides not in “simply” engineering a functional cell “from scratch” but in how to address information residing in living things.

Chemical laws explain and categorize various interactions of materials through a variety of interactions called bonding. Structures which have an “bonding affinity” to attach include bonds such as ionic, metallic, and covalent bonds .

There is a forth bonding called a “weak electrical attraction” which binds molecules such as with hydrogen. The hydrogen bond is not actually a chemical bond but is a force attraction of the polar or electrostatic molecules. As an example, in water, hydrogen atoms are (magnetically) attracted by polarity forming the water molecule H2O. Undoubtedly, all four bonds behave in law-like manners.  Ionic bonds, metallic, and covalent bonds are electron or ion bond and not merely magnetically attached by polarity. Also, ionic, metallic, and covalent bonds always create repetitive molecular structures. Excellent examples of such structures include crystals or snowflakes.

“Among all known chemical interactions, only hydrogen bonds can mediate the low-energy, directional interactions required for the operation of genetic and catalytic tasks.”

The DNA outer spine of the double helix uses covalent bonds which holds together the sugar-phosphates in a repetitive manner. However, the nitrogen base “letters” (G,T,C,A) which write out the blueprints for life in a code-like manner, use the weak electrical attraction of hydrogen polarity.

Biochemists know that chemical bonding affinities have never generated any non-repetitive or specified information outside of those found in DNA base genetics.  Therefore, the sequence of information found in DNA does not and cannot find its origin in any law-like bonding affinity of chemistry.  Thus the mystery for biochemistry to unravel.

This “is not just an absence of differing bonding affinities; there are no bonds at all between the critical information bearing bases in DNA.”2

“There are no significant differential affinities between any of the four bases and the binding sites along the sugar-phosphate backbone…All four bases are acceptable; none is chemically favored.”3

As an illustration Stephen Meyer in his book “Signature in the Cell” uses the analogy of colorful magnetic letters such as those used by children on refrigerators or a metal board.  Each letter has a tiny magnet behind it which causes it to affix itself to the metal medium.  In Meyer’s analogy he explains that the magnet is the chemical affinity of the sugar to phosphates bond. A repetitive force.  Together this chemical affinity provides the sugar-phosphate backbone of the DNA molecule.  However, Meyers’ points out that there are no significant forces of attraction between the individual letters that determined their specific arrangement.  The only known force that can accomplish such arrangements of specified information is intelligence.

“Forces of attraction do explain why the bases in DNA attach to the backbone of the molecules, but they do not explain why any given nucleotide base attaches to the molecule at one site rather than another…(nor does it) explain the origin of DNA base sequencing.”

The conclusion regarding base pair code-like letters of DNA? Chemical bonding affinities have nothing to do with DNA information!  Just like magnetic letters from our analogy could be placed anywhere to convey numerous meaningful word combinations, so also are the base letters of DNA.  In both instances, we recognize from our own experience that intelligence is the only reasonable explanation for the cause of such meaningful information.

“The point struck me as embarrassingly simple: there are neither bonds nor bonding affinities that can explain the origin of the base sequencing that constitutes the information in the DNA molecule.”4

Chemical evolution’s concept of chemical law-like processes providing the mechanism to cause self-organizing bonding affinity of information do not exist or occur anywhere in nature, especially within the specified information storage of the DNA molecule.  To complicate the issue of genetic information even more, geneticists have also identified that messenger RNA (mRNA) and Transport RNA (tRNA) are also highly specified. As an example, there are 20 different amino acids used by and synthesized by every living thing on earth. The tRNA molecule has a specialized carrier (transporter) protein, one for each of the twenty different amino acids used to bring amino acids to the ribosome for protein chain assembly.

“The specific arrangement of nucleotide bases in the molecule: (1) there are no bonds between bases along the information-bearing axis of the molecule and (2) there are no differential affinities’ between the backbone and the specific bases that could account for variations in sequence.”5

THE ORIGIN OF NATURAL LAWS. If you dare to unhitch the leash of naturalism for a moment and wander toward much deeper thoughts. Beyond the natural laws proposed to define what we observe and explain an origin from nothing. Dare to venture beyond textbook categories, charts, and designations which merely list “natural” laws (whether chemical, gravitational, orbital, physical, etc.). Recall that all natural laws operate under strict order with precision and predictability beyond chance. See that the origin of such precise order is not, and cannot be explained, within any scientific category or classification. Therefore, logically, open your mind, recognize that everything we know and observe as intelligent humans point to a purposeful designer. Do not miss the most obvious while memorizing the periodic table of elements or by thinking chemical bonding explains life itself. Open your mind! Life reveals the fingerprints of The life giver: Jesus. Don’t be afraid. “Don’t fear, for I (Jesus) have redeemed you; I have called you by name; you are Mine.” Isaiah 43:1